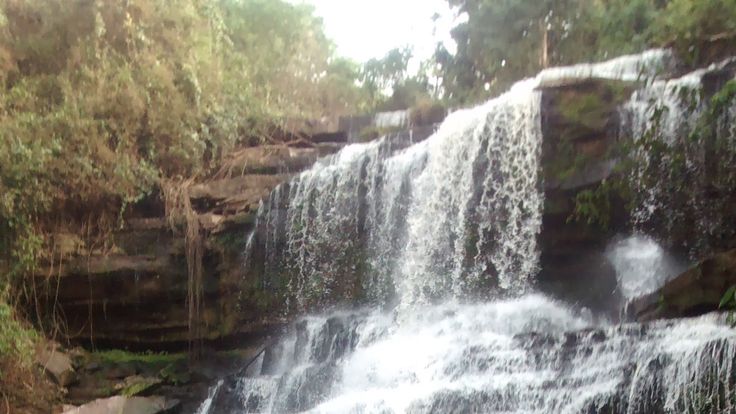 Several others are feared trapped and personnel from the Ghana National Fire Service and the Police have arrived at the scene to rescue the victims.

It happened during a storm on Sunday at the waterfall in Kintampo, a popular bathing spot in Ghana's central Brong-Ahafo region.

According to radio news station Starr News, an eyewitness said: "A huge tree fell at the top when the rains began and crashed the revellers".

A further 22 people were injured in the incident and taken to local hospitals for treatment.

The students and teachers, numbering 63, and a driver were from the Wenchi Methodist Senior High School in the region.

Most of the victims were reportedly students from a local high school, while Ghanaian tourists were also at the site when the incident occurred.

The waterfall, located near the town of Kintampo, was extremely busy with weekend day trippers.

It is reported numerous injured were taken to Kintampo Municipal hospital.

Kintampo Falls is a tourist site popular among domestic and global tourists who throng to the area in the thousands every week.

The Kintampo Divisional Commander, Chief Superintendent Desmond Owusu Boampong, told Citi News 17 bodies had been retrieved from the water. It is located on the Pumpum river - a tributary of the Black Volta, about 4km north of Kintampo municipality.

JJC Police Department Begins Fundraising Efforts for Special Olympics Illinois
But aside from skiing, what she's most looking forward to is seeing new places and meeting new people. Fletcher said it's "very cool" that someone who has trained and raced at Nashoba took home a medal.
Tuesday, March 21, 2017

Samsung Galaxy S8: Making iPhone 7, Galaxy S7 Edge Look Dull
What is clear in the light of these photographs is that the Samsung Galaxy S8 will arrive with a traditional headphone connector. Besides these almost-certain details about the upcoming flagship devices, there have been some confusing and incredible rumors.
Tuesday, March 21, 2017