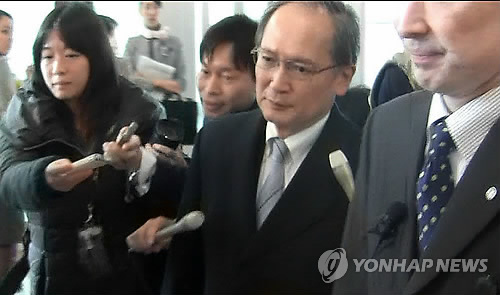 Japan said the statue violated the spirit of a 2015 deal meant to settle the decades-long issue with a Japanese apology and payment of money to survivors.

The minister also said that Nagamine is expected to hold talks with Hwang Kyo Ahn, acting president of South Korea, after his return to Seoul and urge the country to implement an agreement reached in December 2015 between the Japanese and South Korean governments to "finally and irreversibly" resolve the issue of so-called comfort women.

That one, which has become a symbol for activists campaigning on behalf of the few surviving former sex slaves, still stands and Japan saw the new one in the southern port city of Busan as unacceptable.

A senior South Korean Foreign Ministry official on Monday expressed a wish that the ambassador's return to Seoul would promote bilateral communication.

The foreign minister noted the importance of both Tokyo and Seoul maintaining a high level of intelligence-sharing and close dialogue with regard to North Korea's missile and nuclear programs.

Speaking at a briefing at the Ministry of Foreign Affairs, Kishida said that the move to return Nagamine to his post was necessary ahead of a presidential election in South Korea on May 9 and in light of the fact that Japan needed to focus more efforts to prepare for the next administration.

Chief Cabinet Secretary Yoshihide Suga said Japan's other retaliatory actions, such as the suspension of some negotiations with South Korea, including a proposed currency swap arrangement for times of financial crisis, will stay in place.

"The agreement is a promise that the two countries made to worldwide society".

Matt And Jeff Hardy Comment On Their WrestleMania Return
Ky. teenager bitten by a shark in Florida

Boat with 11 Indian sailors hijacked off Somalia coast
Reports said captain of the ship had informed owners of ship as well as authorities in Dubai about the incident. One expert said some in the region had let down their guard as the situation calmed.
Tuesday, April 04, 2017

Moyes: It's do or die for Sunderland at Leicester
Next up is a trip to the rejuvenated champions, who have won their last four matches under new manager Craig Shakespeare. And the result? Well, we failed to score yet again, of course.
Tuesday, April 04, 2017

Patrick Ewing hired to be new Georgetown coach
The move to hire Ewing comes days after an interesting move by Georgetown athletics to attempt to steal Mack away Cincinnati. Ewing was the No. 1 overall pick in the 1985 NBA Draft and made 11 NBA All-Star teams as a member of the New York Knicks.
Tuesday, April 04, 2017