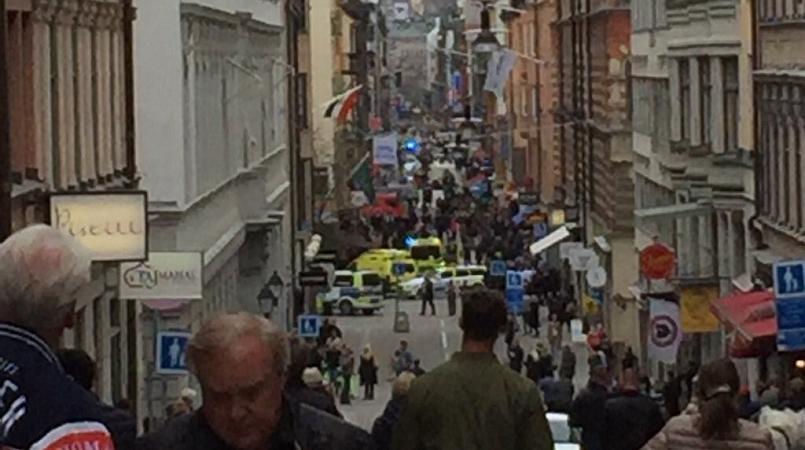 Paris' Mayor Anne Hidalgo, in a communique, expressed her "strong emotion" over "this new terrorist attack of enormous cowardice". Police have released a photo of a man they believe may be connected to the attack. "Many people are totally shocked", Leif Arnmar - an eyewitness to the attack - told Swedish national broadcaster SVT, according to the BBC.

"We stood inside a shoe store and heard something. and then people started to scream", witness Jan Granroth said. Last December, 12 people were killed by a hijacked truck in Berlin, and last month a British man killed five people in a vehicle and knife attack on London's Westminster Bridge.

Police confirmed at least three people were killed in the attack and eight others were injured.

"We are treating it as an attack, without specifications", Nina Odermalm Schei, a spokeswoman for the security service, told CNN.

There was no immediate claim of responsibility for Friday's attack. "Everything points to a terror attack", Prime Minister Stefan Löfven said Friday. A massive manhunt was launched by the police after the terror attack and the injured were rushed to the hospital.

The chaotic scene in central Stockholm after a truck drove through pedestrians and into a department store.

The Swedish Security Service said a large number of people were injured in the attack, which happened just before 3 p.m. local time on Friday.

Swedish newspaper Aftonbladet reported one witness as saying they had seen hundreds of people running for their lives near the Ahlens mall in the area.

Authorities ordered the evacuation of the nearby central train station, although they did not say why. But the person who was driving the truck is not in police custody, The Local reports.

"I saw the driver, a man in black who was light around the face", Brandon told Swedish daily Dagens Nyheter. "A lot of the people around me were hysterical", another witness said on Swedish television, wiping tears from her eyes. But it is not yet clear whether the two incidents are connected or not.

The incident is the second major fatal attack by vehicle this year in Europe.

Taimour Abdulwahab rigged a auto with explosives in the hope that the blast would drive people to Drottninggatan - the same street hit Friday - where he would set off devices strapped to his chest and back.

The attack comes two weeks after a similar attack in central London, which killed four pedestrians and a police officer and trapped MPs in the Houses of Parliament. "We don't have numbers yet", he said.

Another truck surprised a shoppers at a Christmas market in Berlin in December.

Fortunately, no-one other than the attacker was killed in that incident.