Home / Science / Self-Driving Cars Aren't That Safe with This Exploit 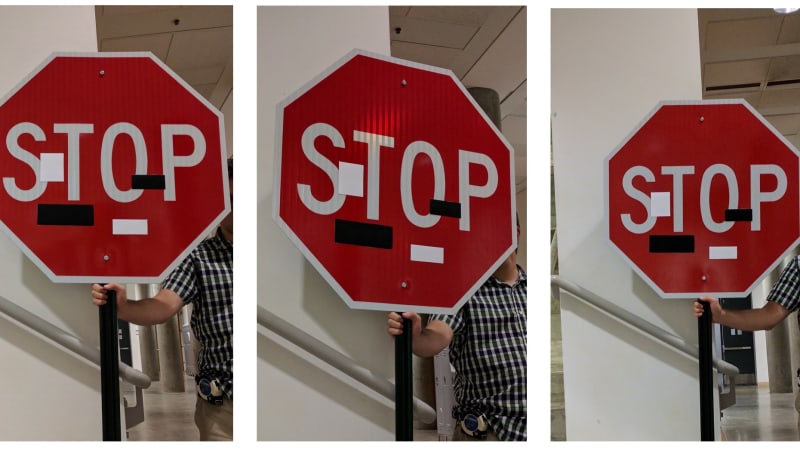 Self-Driving Cars Aren't That Safe with This Exploit

Driverless cars could ignore road signs on the streets since they can be confused by simple vandalism, researchers have found.

As self-driving technologies continue to develop, the vulnerabilities associated with them have also become a point of debate. For instance, they printed up stickers to trick the vision system an autonomous auto would use into reading a stop sign as a 45-mile-per-hour sign, the consequences of which would obviously be very bad in the real world. The researchers say manufacturers could use contextual information to make sure it's reading a sign correctly.

While we already have vehicles with systems capable of reading road signs, the researchers showed how easy it is to hack the systems into interpreting the information shown on road-signs incorrectly, using nothing more complex than a few well-placed stickers.

Obviously you could trick cars into speeding up when they're supposed to slow down, or to stop when they should be driving.

The team came up with four ways to con the recognition systems of driverless vehicles into misreading things using just a color printer and a camera. Then, they masked a Right Turn sign with grey stickers to confuse the car's algorithm to see it as either a Stop or Added Lane sign. The most troubling part about these experiments is that they all appear very subtle to the human eye, camouflaged as graffiti, art, or incorporated into the sign's imagery.

One method for bamboozling the self-driving cars involved printing a poster and simply sticking it over the existing sign.

Though the sign looked nearly normal to a human, other than being a little faded in places, the consequences for the computer's vision were catastrophic. By adding the stickers "love/hate" on a stop sign, the computer mistook it for a speed limit sign. It may mean that the information in the auto isn't always up to date with road layout changes, but it would provide a more robust solution than a vehicle simply reading a sign.

Indian Firm in Talks to Sell Content Trove to Apple, Amazon, Netflix
Eros Plc takes charge of overseas distribution and Eros Now, while Eros India is primarily responsible for content creation. Since the deal is in a very early stage, spokesperson from either Eros or Apple declined to share the details of the deal.
Tuesday, August 08, 2017

CCTV shows jogger 'pushing' woman into path of London bus
Thanks to the bus driver's quick thinking, he swerved and saved the woman from what would have been certain death. We would encourage him or any individual who remembers him to connect with us as quickly as time permits'.
Tuesday, August 08, 2017

Memorial Hermann Once Again Earns Top Recognition by US News & World Report
Baystate Medical Center was ranked the third best hospital in MA , rated high performing in nine adult procedures and conditions. The health system ranked No. 9 in gastroenterology and GI surgery and No. 10 in cardiology and heart surgeries .
Tuesday, August 08, 2017