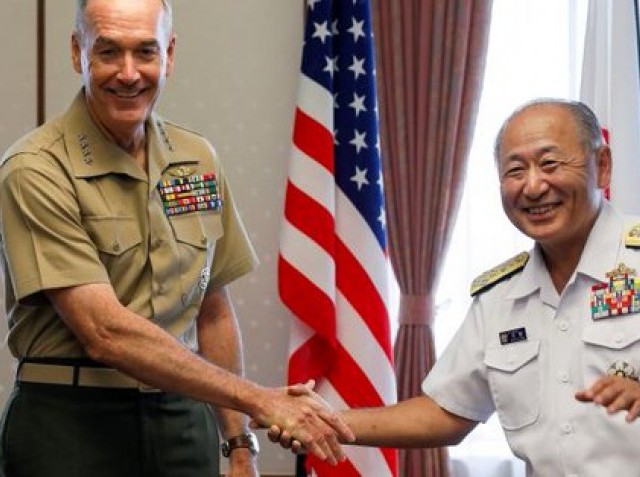 US, South Korea drills begin amid tensions with North

In turn, Mr Kim has threatened to fire missiles towards the U.S. territory of Guam in the Pacific Ocean.

Pyongyang's state media last Sunday called this year's drills a "reckless" move that could trigger the "uncontrollable phase of a nuclear war".

The warning came on the eve of the Ulchi Freedom Guardian, an annual military exercise between Seoul and Washington.

U.S. President Donald Trump warned North Korea this month it would face "fire and fury" if it threatens the United States.

No field training, like live-fire exercise or tank maneuvering, is involved in the Ulchi drills, in which alliance soldiers, mostly senior officers, sit at computers to practice how they engage in battles and hone their decision-making capabilities.

South Korean media reports have said the USA was considering scrapping a plan to bring in two aircraft carriers to the peninsula.

The joint U.S. -South Korean drills last until August 31 and involve tens of thousands of troops as well as computer simulations created to prepare for war with a nuclear-capable North Korea. The allies have said the drills are defensive in nature.

North Korean has accused Australia of committing a "suicidal act" over its strong support for the US, including Malcolm Turnbull's pledge to invoke the ANZUS Treaty in the event Pyongyang attacks and participation with US and South Korea for joint military drills.

Last month North Korea test-launched two ICBMs at highly lofted angles, and outside experts say those missiles can reach some US parts like Alaska, Los Angeles or Chicago if fired at normal, flattened trajectories.

An editorial said: "The joint exercise is the most explicit expression of hostility against us, and no one can guarantee that the exercise won't evolve into actual fighting".

Tensions in the region show no sign of abating, escalating following a new round of United Nations sanctions against North Korea earlier in August, in response to fresh missile tests by Pyongyang.

The exercise between Seoul and Washington, which has been held since the 1970s, will be largely computer simulated and created to hone responses to any situation from conventional weapons to a nuclear war. About 17,500 US service members are participating in the exercise this month, down from 25,000 a year ago, according to the Pentagon. However, the US and South Korea maintain they are purely defensive. Korea, for the time being, must carry out the exercise successfully and demonstrate its power to North Korea.

"This right now is an exercise to make certain that we're ready to defend South Korea and our allies over there", Mattis told reporters aboard an aircraft flying to Amman, Jordan. The latest sanctions were imposed after North Korea tested two intercontinental ballistic missiles in July.

J&J ordered to pay $417 million in trial over talc cancer risks
Louis, Missouri, jury ordered the company to pay $110.5 million to a woman in Virginia who was diagnosed with cancer in 2012. J&J lost four of those trials and along with a talc supplier has been hit with a total of $307 million in verdicts.
Tuesday, August 22, 2017

Britney Spears just turned on her mic and invented live singing
One minute they (media) tear you down and the next minute you're on top of the world, but I've never really spoken about it. According to the star, dancing and singing live on stage is a lot of hard work and not getting credit for it is irritating.
Tuesday, August 22, 2017

Mystikal Turns Himself On Rape Charges
According to media reports , Michael Tyler aka Mystikal , has been put behind bars yet again...and it is for rape allegations. Law enforcement officials say that the charges stem from an alleged 2016 sexual assault of a woman at a local casino.
Tuesday, August 22, 2017