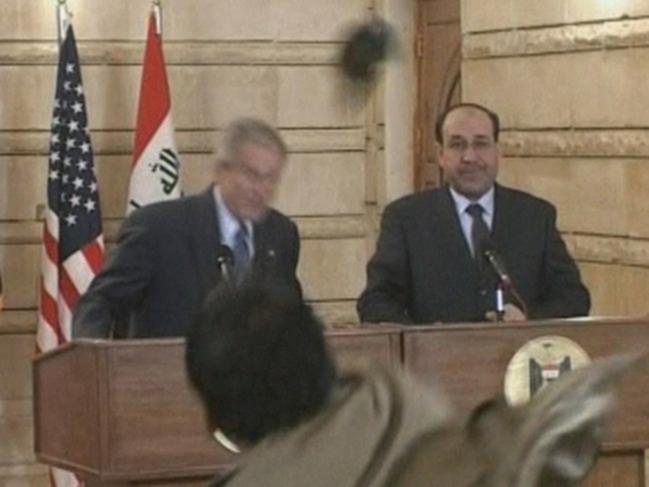 "This is a farewell kiss from the Iraqi people, you dog", he shouted in Arabic while throwing his footgear.

Nearly a decade after sparking an global diplomatic incident by throwing his shoes at former US President George W. Bush in Baghdad, Muntadhar al-Zaidi is planning a political career of his own. He was working for Egypt-based al-Baghdadia television network at that time when he tried to attack Bush over American forces "illegal occupation" of the country.

He was tackled by then-Prime Minister Nouri al-Maliki's bodyguards shortly after he threw the second shoe.

While Bush flew home, al-Zaidi was sentenced to three years in prison, which was eventually reduced to just 12 months.

One Saudi businessman reportedly offered $10 million for the shoes thrown at Bush, while Ramazan Baydan, the company behind the shoes, experienced a surge in sales, receiving orders for 300,000 pairs in one week. If Al-Zaidi is successful in winning the upcoming elections, he will play a role in choosing Iraqi's next government.

The video shows Al-Zaidi shouting "You killed the Iraqis!" as security staff pinned him to the ground.

Bush adroitly dodged both projectiles, but Zaidi was not so fortunate: He spent nine months in jail, where he was tortured and had his nose, teeth and foot broken, he claims.

Muntazer Zaidi, 39, hopes to win a seat on Iraq's Council of Representatives, the national legislative body.

A man who threw his shoes at former USA president George W. Bush during a farewell visit to Iraq in 2008 is now running for a seat in the embattled country's Council of Representatives. "He occupied my country and he killed my people".

Liverpool captain Henderson sends moving letter to GAA club of Sean Cox
A gofundme page set up by an Irish Liverpool supporters group has now raised nearly €80,000 for Mr Cox and his family. Pallotta said the attack on Cox was "just the most disgusting stupidity and my prayers are for him and his family".
Wednesday, May 02, 2018