Home / Economy / BHP brought to a halt by runaway train 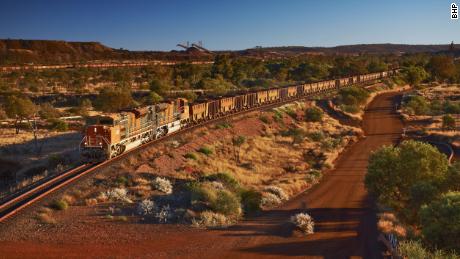 BHP brought to a halt by runaway train

A BHP Billiton iron-ore train travelled 92km without anyone on board in WA after its driver stepped out to check an issue with one of its wagons.

A driverless, 268-car iron ore train was derailed in Western Australia on Monday - but only after it traveled almost 60 miles without an engineer, officials said.

BHP suspended all Western Australian iron ore rail operations after opening an investigation into the incident.

It was operated by mining company BHP Billiton and traveling across Western Australia from the remote mining town of Newman to Port Hedland on Monday.

A BHP spokeswoman told the West Australian newspaper no one was injured.

The damage to the vehicle was substantial, the Australian Transport Safety Bureau said.

'We are working with the appropriate authorities to investigate the situation, ' she said.

"While the driver was outside of the locomotive, the train commenced to runaway", the ATSB statement said.

The train travelled 92km until it was deliberately derailed by a control centre 119km from Port Headland about 5.05am, the ATSB site reported.

Watch Here: Ryan Reynolds Goes After Hugh Jackman in Mock Political Ad
The man is one of the best at trolling his fellow celebs and he holds back for absolutely no one - including his own wife . The 50-year-old Aussie revealed that Reynolds urged him to star in a crossover Deadpool-Wolverine film.
Tuesday, November 06, 2018

He ate a slug on a dare, became paralyzed and died
The NDIS said it had been "working closely with the Ballard family" to find a resolution and increase Sam's support package. Sam Ballard, 28, a promising rugby player from Sydney, ate the slug while enjoying a few red wines with his friends in 2010.
Tuesday, November 06, 2018