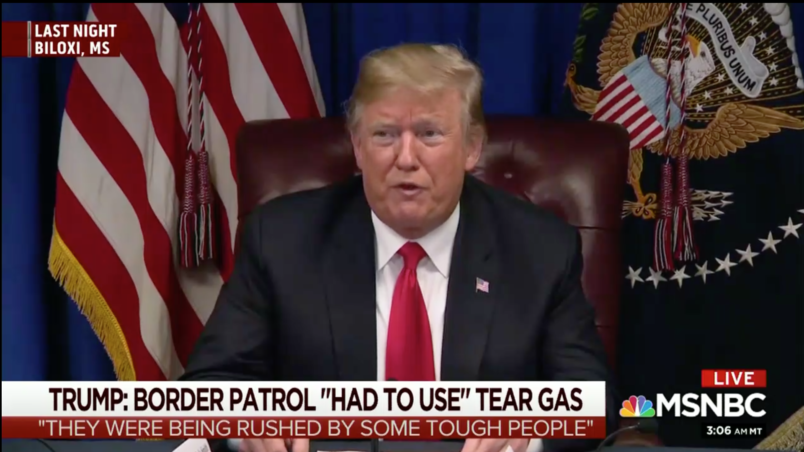 The violence began when a group of migrants broke away from the protesters and attempted to cross the border.

When they neared the second fence United States border agents fired tear gas and rubber bullets at them as helicopters buzzed overhead, an AFP journalist saw. There can be no disagreement when it comes to firing tear gas on innocent families.

Mexico's Interior Minister Alfonso Navarrete said on Monday that migrants who attempted to cross into the USA in a "violent way" would be deported.

US Customs and Border Protection closed road and pedestrian bridges on Sunday at the San Ysidro port of entry, one of the largest land border crossings between San Diego and Tijuana, Mexico.

More than 5,000 migrants have been camped in and around a sports complex in Tijuana after making their way through Mexico in recent weeks via caravan. Many are from El Salvador, Guatemala and Honduras.

Lurbin Sarmiento, 26, of Copan, Honduras, said she had been with her 4-year-old daughter at a concrete riverbed, which had a trickle of water from the Tijuana River, when US agents fired the gas.

She told the Associated Press, "We ran, but the smoke always reached us and my daughter was choking".

She added: "I was scared, and I thought I was going to die with them because of the gas".

Wind carried the gas beyond the migrants who charged the fence and took it toward people waiting some distance away, APTN reported. US officials closed the border crossing at San Ysidro for several hours at the end of last week.

On Friday, Tijuana Mayor Juan Manuel Gastelum declared a humanitarian crisis in his city, which is home to 1.6 million people.

Mexican police, some wielding shields, scattered migrants and protesters, many of whom rushed toward the US border. A Tijuana official said Monday that things will get worse if the migrants don't get help from the federal government.

Donald Trump threatened to permanently close the US-Mexico border on Monday after US authorities used tear gas to stop migrants crossing into the country illegally.

"We're dealing with folks who've already been traumatized by what they have encountered in their march toward this country, and many of them are fleeing countries that the United States intervened in", Wane told hosts Eugene Puryear and Sean Blackmon, referring to the thousands of Honduran migrants fleeing circumstances caused by the US-supported 2009 coup in their home country. "Do it by plane, do it by bus, do it anyway you want, but they are NOT coming into the United States of America".

NASA scientists celebrate InSight landing with handshake worthy of the National Basketball Association
InSight is set to be the first probe sent to investigate the interior of Mars. Mars has been the graveyard for a multitude of space missions.
Tuesday, November 27, 2018

Super Smash Bros. Ultimate is Switch's best pre-selling game to date
Physical copies in the wild before a game's release can only mean one thing: spoilers , and lots of them. It appears Nintendo struck a chord with the announcement of Piranha Plant as a Super Smash Bros .
Monday, November 26, 2018