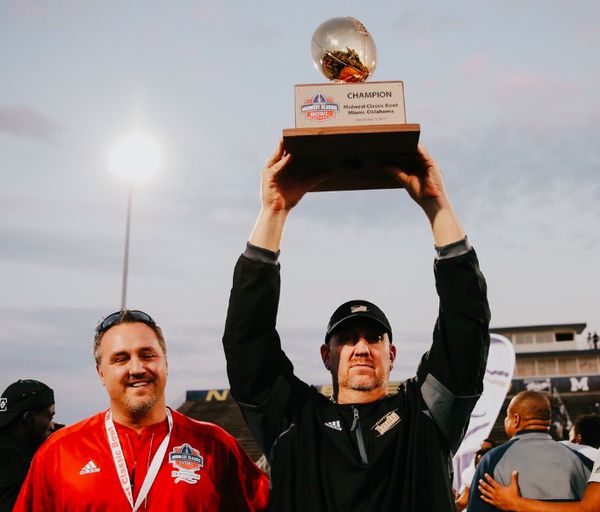 'Last Chance U' coach resigns after inflammatory texts to player

Brown, who has been featured on Netflix's Last Chance U, has stepped down from his position about a week after he allegedly told a German player "I'm your new Hitler".

Alexandros Alexiou provided KGGF Radio with a text message conversation between himself and Brown, during which the coach called himself "your new Hitler" when talking about disciplinary measures. "I have spoken with Coach Brown about his message to the student, and he fully understands that his language was not appropriate".

Independence Community College head coach Jason Brown announced his resignation in a post on twitter. Just a list of accomplishments and a plethora of thank you's.

"The events of the past few weeks has led me to resign", Brown wrote.

"Given what has most recently been allowed to transpire, it is clear, that it will be almost impossible to stay here".

"I urge all of the naysayers on campus and in town to really look at yourself in the mirror and do a self-evaluation of yourself before so harshly judging others".

School President Dan Barwick said in a statement it was investigating the text messages. In one of them sent on February 12 to freshman Alexandros Alexiou, Brown allegedly referenced the former Nazi leader during an exchange about Alexiou's status on the team after accruing too many disciplinary infractions.

The original story and allegations came last week in the Montgomery County Chronicle - a weekly newspaper covering a small region in southeast Kansas - and later took the Internet by storm. The board decided not to take action.

Brown was hired as ICC's head coach in 2016, tasked with turning around a program with a recent history of losing. Season four, which will focus on the 2018 campaign, has already been filmed and will air on Netflix later this year. After all, he was the only white kid in his Compton, California neighborhood at a time when gang violence and racial tensions split the state like a stake through the heart.

Waterford parents issued with warning over disturbing Momo challenge targeting kids
It reportedly also tells those it is communicating with that bad things will happen if they report their involvement to adults. Her mum said: "I had seen a status about it online, a friend had shared it so I looked at it and spoke to my partner".
Wednesday, February 27, 2019

Toronto Raptors vs. Boston Celtics - 2/26/19 NBA Pick, Odds, and Prediction
The sombre, mortuary-like mood in the visitors' locker room would suggest things aren't alright with this Boston team. Toronto's lead stretched to as many as 31 in the quarter before settling on a 95-68 bulge heading into the fourth.
Wednesday, February 27, 2019