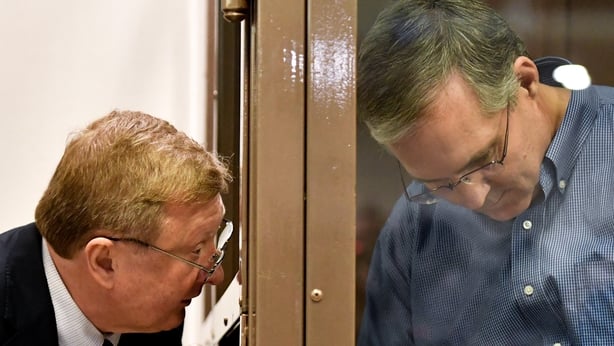 Paul Whelan, a former US Marine had been accused of espionage and arrested in Russia

Maria Butina, a Russian who admitted to secretly working for the Kremlin to infiltrate conservative us political groups, was sentenced Friday to 18 months in prison. The judgment, which Butina can appeal, is a turning point in the high-profile case that garnered intense media coverage amid speculation over the extent of Russian interference in American politics.

Chutkan said that Butina, who studied at American University in Washington, engaged in work on behalf of a Russian official that was "sophisticated" and "dangerous".

Butina pleaded guilty in December to one count of conspiring to act as a foreign agent and agreed to cooperate with prosecutors.

Chutkan also ordered Butina to be deported to Russian Federation immediately after she finishes her prison sentence, which is expected in March 2020 after receiving credit for the time she has already spent in USA custody.

"My reputation is ruined, both here in the United States and overseas", she said, asking for "a chance to go home and restart my life".

The ruling, issued April 26 by Judge Tanya Chutkan in U.S. District Court in Washington, D.C., matched what prosecutors had requested in their presentencing filings.

In her remarks to the judge, Butina expressed remorse, and said she regretted the harm her conduct has caused not only herself but also the United States, a country she said she greatly admired.

"If I had known to register as a foreign agent, I would have done so without delay", Butina said on Friday.

"I have three degrees, but now I am a convicted felon with no job, no money", she said. "I do not believe an additional nine months in jail serves any goal". We insist on the innocence of our compatriot. Her lawyers argued that she be released immediately, having been in jail since her arrest. "We will continue to provide her with comprehensive consular and legal assistance".

"This case is not simply about failing to notify the attorney general", Chutkan said.

According to her plea agreement, the 30-year-old worked with former Russian lawmaker Alexander Torshin to use their contacts in the NRA to pursue back channels to American conservatives during the 2016 presidential campaign. They wanted to influence American politics on behalf of the Russian government, and do it in a way that could possibly hurt US interests, authorities said.

In its sentencing memo, prosecutors claimed Butina's actions were part of a so-called "spot and assess" operation, where in Butina was providing the Russian government with information it could later use to recruit susceptible targets.

The case against Butina was separate from Special Counsel Robert Mueller's 22-month investigation of Russian interference in the 2016 USA election, which detailed a series of contacts between Trump's campaign and Russian officials. "I came to the United States not under any orders, but with hope, and now nothing remains but penitence".

Prosecutors said they expected the deal would provide information about Russia's efforts to interfere in USA politics.