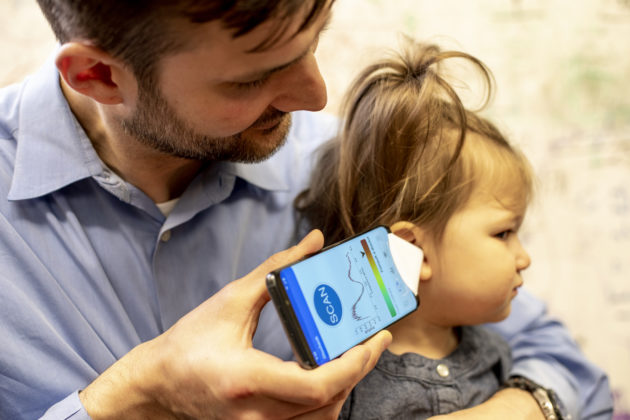 Dr. Randall Bly one of the University of Washington researchers uses the app on his daughter’s ear

Scientists have created a user-friendly smartphone-based platform that can quickly detect the presence of fluid in the middle ear - a likely indicator of ear infections - in children. The system requires no additional equipment beyond a small paper funnel to focus the sound, which can be constructed from printer paper, scissors and tape in under three minutes.

A study found the tool worked as well as some doctors' tests.

Diagnosis is hard. Usually a pediatrician will peek into the child's ear to see if the eardrum is inflamed, and parents can buy devices that use cameras to do the same thing. Five in six children come down with at least one ear infection - and that's just before the child turns 3, according to the National Institutes of Health, which says that "ear infections are the most common reason parents bring their child to a doctor". Their findings were published May 15 in Science Translational Medicine. "Depending on how much liquid is..."

"Importantly, parents of patients operated the system as easily as physicians in a separate experiment involving 25 patient ears, and the software was not substantially affected by background noise such as the sound of a crying child", said Chan. Bly and other researchers at the school have developed the system to "hear" a warning sign of ear infections _ fluid build-up behind the eardrum.

"It's not actually easy for existing screening tools to detect middle-ear fluid".

Researchers said the app works on kids of all ages and that they were able to train parents involved in the study to use the app at home. It has vague symptoms, from tug of the ears to fever, or there could be no observable symptoms at all. Really, the only way you can know, with complete certainty, is to undergo a surgical operation where they make an incision into the eardrum, where it can drain the fluid. "We used our smartphone system on the morning of the ear tube surgery and compared the results with the ground truth of what happened during surgery". Roughly half of those kids were getting tubes in their ears replaced, while the others were getting their tonsils removed or another non-ear procedure. "So these surgeries created the ideal setting for this study", explains co-first author Sharat Raju. The team tested their app on 53 children between the ages of 18 months and 17 years at Seattle Children's Hospital.

The algorithm itself was correct in 85% of the patients, which the team says is comparable to current methods that specialized doctors use. This time, the app correctly identified all 5 children who had ear fluid, while correctly guessing nine of the 10 children who didn't have fluid.

One day, parents might be able to use this app to screen their own children at home to help determine whether they need to be seen by their pediatrician or not.

Realme Releases Realme X - Their First Smartphone on the Chinese Market
The primary camera is a 16-megapixel sensor instead, and has a bigger 4,045 mAh battery with support for VOOC Flash Charge 3.0. Unlike the no-notch dispaly of the Realme X , this one comes with a dewdrop notch and offers an aspect ratio of 19.5:9.
Saturday, May 18, 2019