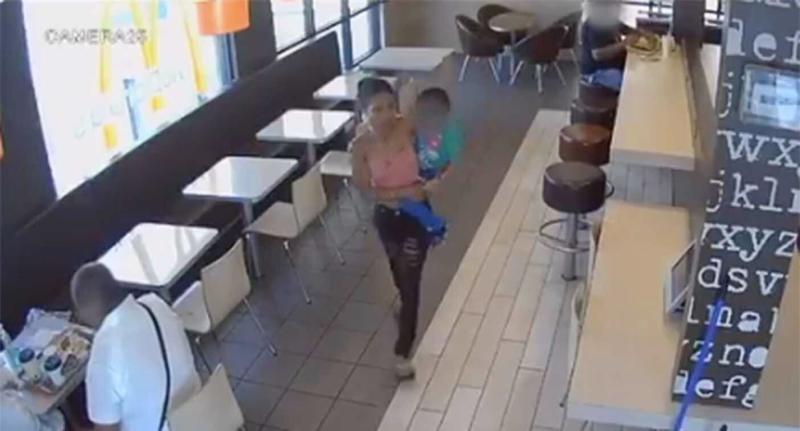 A woman has been caught on camera taking a child from a McDonald's restaurant, moments before witnesses stopped her from driving away with the little boy.

Police arrested a woman who tried to kidnapp two boys from two different McDonald's this week.

The suspect, identified as 33-year-old Maralyn Ramos, was arrested Wednesday night near the intersection of Agatha Street and San Pedro Street in downtown Los Angeles, the LAPD stated in a news release.

The four-year-old boy in that incident was walking next to a family member when the suspect walked up, grabbed the child's hand and attempted to walk off with the child, according to police.

CCTV footage from inside the restaurant shows the boy standing on his own next to a table, before the woman walks over to him, picks him up and begins to walk out.

The suspect is described as a 25 to 30-year-old black or Hispanic woman with black hair. They said she subsequently took off on foot.

Authorities say they believe Ramos tried to kidnap another four-year-old Wednesday, but was again stopped by a witness and took off. Bail has been set at $100,000.

She then fled the scene on foot, police stated.

Police asked that anyone with information on the attempted kidnappings call detectives F. Arroyo or D. Moreno at 213-486-6840, KNBC reported.

The second incident occurred at the intersection of Martin Luther King Jr.

U.S. Orders 'Nonemergency' Government Employees To Leave Iraq
Last week the Trump administration rushed military assets to the region in response to what it said were "credible threats"... The United States keeps about 5,000 soldiers in Iraq, who have been helping Iraqi security forces fight ISIS terrorists.
Saturday, May 18, 2019