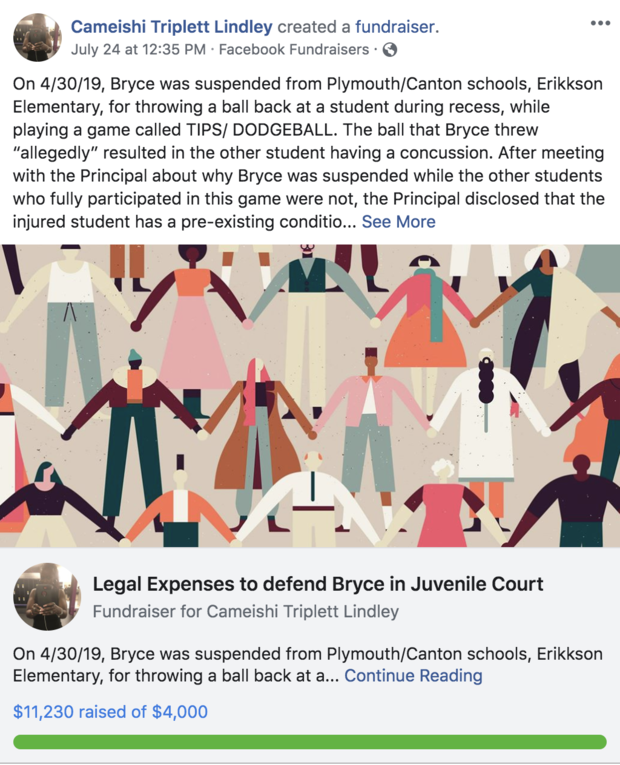 Black boy charged with assault after schoolyard game of dodgeball

Prosecutor Kym Worthy stated, "In many juvenile cases, we are able to craft solutions prior to charging any offense".

The then-fourth-grade boys were playing a version of dodgeball in which students throw the balls into the air, Lindley said.

A 10-year-old from MI was charged with aggravated assault after allegedly injuring another student during a schoolyard game of dodgeball, but prosecutors said on July 31 that the charges were dropped.

Cameishi Lindley said she was startled when she received a call from Wayne County Juvenile Court last Wednesday and learned her son, Bryce, had been charged with aggravated assault for reportedly hitting another boy in the face with a ball at their school in Canton, Mich., according to local station WXYZ.

Lindley says she and her son, Bryce, had no idea about the boy's condition.

"This case was looked at and the evidence showed that the child intentionally threw the ball with force when he acted", Miller said.

The soon-to-be fifth grader will face a juvenile court judge on August 1.

He hit a child in the face, who has a condition where head injuries can be more unsafe. It was about her 10-year-old son, Bryce.

The boy who was hit with the ball suffered facial tissue damage, a black eye and a bruised nose. She was anxious for her child's safety. The 10-year-old was suspended from school for one day.

"It is categorically wrong to suggest that this was charged based on race or geography", she said.

While Bryce was suspended from school for the incident back in April, almost three months later he is now facing criminal charges.

The Wayne County Prosecutor's Office said on Wednesday, a day before the scheduled court appearance, that it dropped the aggravated assault charge, reported Fox 2.

According to Detroit TV Station WXYZ-TV, students were playing dodgeball at Ruth Eriksson Elementary in the town of Canton on April 29th. She also believes the child should not have been playing the game if he was particularly susceptible to injuries.

"I'd be sorry for any child that got hurt", Lindley said.

"My son was hit twice in the face with a ball previously due to this", she continued.

Lindley created a fundraiser to help pay for her son's legal fees, seeking to raise around $4,000. "The child apologized to my son and my son said 'Mom, it's OK, we're still going to be friends, '" the mother, who remained anonymous, told WXYZ-TV.

'I have no doubt that both families involved love their children and want the best for them.

A fundraising effort started by the family to cover their legal expenses was closed after raising more than $15,000.