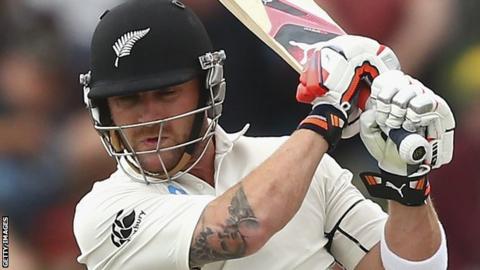 Legendary New Zealand cricketer Brendon McCullum on Monday announced his decision to retire from all formats of the game at the end of the ongoing Global Canada T20 League, bringing down the curtains on an illustrious career.

Brendon McCullum, who is now playing in the Global T20 tournament in Canada has confirmed that he will retire from all forms of cricket after this tournament.

This means McCullum will not turn up for Glasgow Giants as one of the icon players in the inaugural Euro T20 Slam from August 30.

"It is with great pride and satisfaction that I am today announcing my retirement from all cricket".

McCullum revealed he lost the drive to extend his professional career in the recent months and so has chose to call time on his career.

McCullum said he will now concentrate on television commentary and coaching.

New Zealand's captain Brendon McCullum walks off the ground after being dismissed for four runs during the first day of the third cricket test match against Australia at the Adelaide Oval, in South Australia, November 27, 2015. From Culling Park to Lord's and everything in between, there have been some wonderful memories.

The Kiwi stated next aspect in his career will be both in media and coaching. "I can leave the game knowing I left no stone unturned", he added.

"It's been one hell of a ride but I've always maintained all good things must come to an end", he concluded. He played 101 Tests, 260 ODIs and 71 T20Is and was instrumental in turning New Zealand into a world-beating side.

"I am sad to leave playing the game I love behind, but I am excited about what the future holds".

Belgian rider Lambrecht dies after crash in Tour of Poland
One rider anonymously told reporters Lambrecht had his arms raised calling for a cycling director moments before the crash. Lambrecht had been promoted to Lotto Soudal's senior setup a year ago having shown potential for their Under-23s team.
Tuesday, August 06, 2019