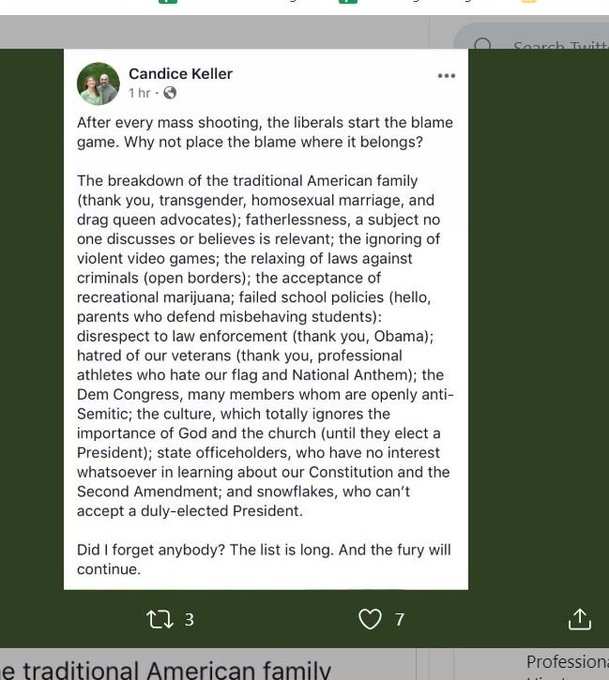 Ohio GOP calls on conservative lawmaker to quit for comments

A conservative Republican state lawmaker from OH has come under fire after posting a message on Facebook blaming mass shootings in America on, among a long list of things, "drag queen advocates, ' 'homosexual marriage, ' 'fatherlessness" and even former President Barack Obama.

Early Sunday morning, nine people were killed and 27 others were injured during a shooting in Dayton, Ohio.

The state's Republican Party is now calling for her resignation.

An Ohio lawmaker says gay marriage, recreational marijuana and open borders are among the factors to blame for mass shooting. Why not place the blame where it belongs?' Keller, who is a vocal supporter of President Donald Trump, wrote.

The Cincinnati Enquirer reports that Ohio state Rep. Candice Keller posted an unhinged Facebook rant shortly after the mass shooting in Dayton, Ohio that sought to blame everything but easy access to firearms for the latest massacre of American citizens.

Keller finished her post with "Did I forget anybody? And the fury will continue", she said at the end of the post.

"Some want to politicize these events, and I can not condone such comment and behavior", he said.

The post quickly caught the attention of several other OH politicians, including a councilman in Cincinnati who posted the phone number to Keller's office in Columbus and urged people to "let her know" what they thought of her post.

The comments drew ire from her own party, including the head of the Ohio GOP, Jane Timken.

"While our nation was in utter shock over the acts of violence in El Paso and Dayton, Republican State Rep. Candice Keller took to social media to state why she thought these acts were happening", Timken said in a statement.

Keller has a history of making incendiary comments.

Newsweek reached out to Keller's office but did not receive a response in time for publication.

In 2017, she likened Planned Parenthood to Nazis and appeared on a white supremacy advocate's radio show.

Ohio Democratic Party chairman David Pepper noted that Keller will be up for re-election in 2020 and wrote on Twitter, "Ohio can't afford Keller in the Senate".

"Those people aren't even buried yet and she came out with these comments", Jones said, according to the publication.