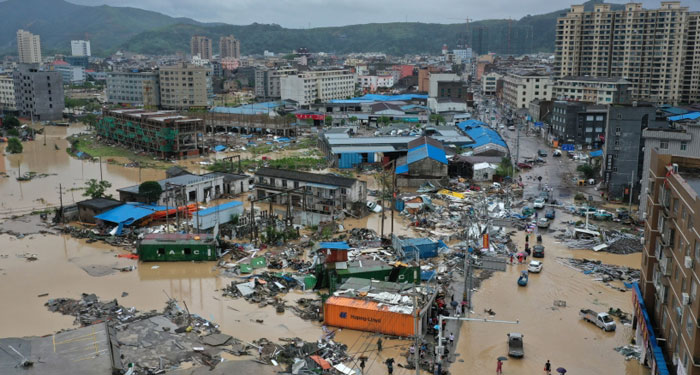 It is expected to make a second landing along the coastline in Shandong late Sunday, packing strong winds and heavy downpours. Thirty-two victims were reported in Zhejiang, with a majority of them from Yongjia county, the authorities added.

"In Zhejiang alone, more than 21,000 service personnel and militia members have been engaged in rescue and relief".

Numerous earlier deaths occurred when a natural dam collapsed in Zhejiang after a deluge of 160 mm (6.2 inches) of rain within three hours.

Lekima, the ninth typhoon of this year, landed around 1:45 a.m.

According to China's Ministry of Emergency Management, more than one million people had been evacuated in Zhejiang and Jiangsu provinces and the financial hub of Shanghai due to the typhoon. "The water rose to the fourth floor in less than 10 minutes", said Pan Jianli, a resident.

Official Xinhua news agency said the toll had risen to 39 in Zhejiang province, where Lekima made landfall on Saturday, packing winds of almost 190 kilometres per hour (120 miles per hour) and pounding the coast with waves several metres in height.

It has already damaged more than 189,000 hectares of crops and 36,000 homes in Zhejiang, provincial authorities said, estimating the economic losses at 16.6 billion yuan ($3.47 billion), the state news agency Xinhua said on Sunday.

The waves beating against the bank in Qingdao, east China's Shandong Province on August 11, 2019. A total of 47 flights have been adjusted.

In the northeastern province, more than 106,000 residents have been relocated, 28 trains disrupted and all major tourist destinations closed.

Trump Brags About Crowd Size During Hospital Visit in El Paso
Your DSLR Camera Can Be Prone To Ransomware; Here’s How

Trump Brags About Crowd Size During Hospital Visit in El Paso
He also defended his rhetoric on issues including immigration , claiming instead that he "brings people together". Also, according to the Washington Post , a number of survivors wouldn't meet with Trump, which isn't surprising.
Monday, August 12, 2019

Realme 5 Series Phone India Launch Set for August 20, Flipkart Reveals
Now, it is a 48 megapixel IMX 586 sensor & note 64MP camera as that's coming with the upcoming Realme X series phone. We don't know the camera specs yet, but the company has unveiled the purposes the different sensors will be serving.
Monday, August 12, 2019