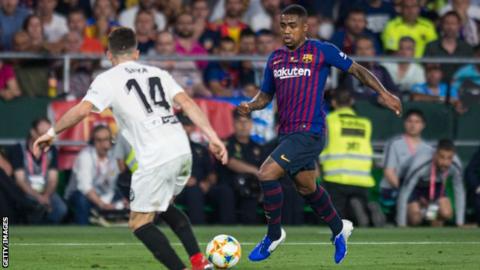 Barça have confirmed one of the most expected sales this summer as Malcom leaves the club to sign for Zenit Saint Petersburg in a deal worth up to €45m.

The 22-year-old joined Barca from Bordeaux last season, and scored four goals in 24 games for the Catalan giants.

Goal reported on Thursday that Malcom will earn around €6.5 million (£5.9m/$7.2m) per season in Russian Federation.

But with Barca having spent big on Frenkie de Jong and Antoine Griezmann, Malcom has now been deemed surplus to requirements at Camp Nou.

Premier League side Everton and Bundesliga outfit Borussia Dortmund were also believed to be interested in Malcom but Zenit have won the race.

Malcom struggled to carve out a regular place for himself in Ernesto Valverde's attacking setup, sitting behind the likes of Lionel Messi, Luis Suarez, Ousmane Dembele and Philippe Coutinho in the Blaugrana pecking order.

He scored 23 goals in 96 appearances across all competitions for the Ligue 1 side before his move to the Camp Nou last summer.

It's understood that the speedy winger has committed his future to the Russian club by signing a five-year contract that runs until 2024, according to The Guardian's Fabrizio Romano.

Teenager arrested for throwing boy from tenth-floor
She said the person who was restrained by members of the public before the police arrived "just stood there and was quite calm". Others wrote that the art gallery had been evacuated, although some people remained inside and the building was "on lockdown".
Sunday, August 04, 2019