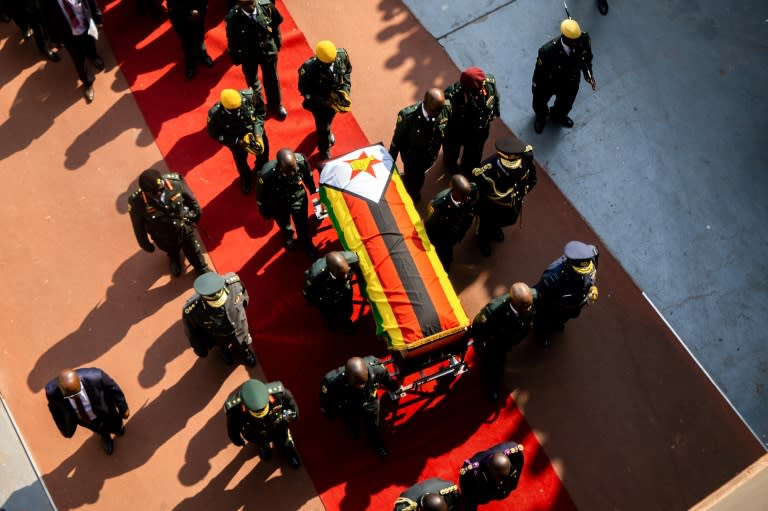 Zimbabwe ex-president Robert Mugabe's family and the government squabbled over his burial on Thursday, with the place - and even its date - still unclear after relatives snubbed a plan for him to be entombed at a national monument.

"Yes I can confirm", his nephew Leo Mugabe told reporters when asked whether the family had agreed to a burial at the National Heroes Acre in Harare.

On Friday, foreign dignitaries were due to start arriving in Harare ahead of a state funeral planned to be held at the country's National Sports Stadium on Saturday.

Leo Mugabe said later there was no feud, claiming the burial would be private.

Mnangagwa, a one-time protege of Mugabe, called the former president a "national icon" after his death.

Soon after, Mugabe was toppled by protesters and the army in what was seen as part of a power struggle within the ruling ZANU-PF party between pro-Mnangagwa factions and Mugabe loyalists siding with his wife Grace.

The former leader had been travelling to Singapore regularly for medical treatment, but his health deteriorated rapidly after his ousting, which allies say left him a "broken soul".

Despite Mugabe's long history with his successor President Emmerson Mnangagwa, Mugabe was adamant that he did not want him Mnangagwa to take over and had openly stated that he preferred Defence minister, Sydney Sekeramai.

After the bitter fallout between Mnangagwa and Mugabe, the former president further showed his disapproval of Mnangagwa's presidency when he endorsed opposition party, MDC Alliance leader Nelson Chamisa for the July 2018 elections.

Mnangagwa himself is under pressure after promising a new post-Mugabe era of more investment and jobs after he came to power, with little success.

Mexico slams US Supreme Court order on asylum restrictions
Election not referendum is the priority, says Jeremy Corbyn in Walsall

Google Doodle honors Danish microbiologist Hans Christian Gram and his groundbreaking discovery
The Google doodle shows Gram carrying out an experiment, a close up of the bacteriologist, a microscope and bacteria particles. The Google doodle that honours Gram on his birth anniversary today was illustrated by Danish guest artist Mikkel Sommer.
Friday, September 13, 2019

Three Australians arrested in Iran, government says
Relations between the United Kingdom and Iran took a plunge in recent months by a row over the seizure of oil tankers. The Australian Office of International Affairs and Trade did not promptly to answer to requests for comment.
Friday, September 13, 2019