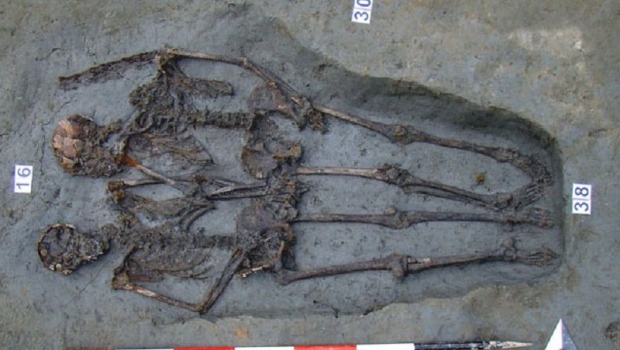 The discovery of two individuals buried hand-in-hand, or even embracing, is nothing new.

"We suggest that the "Lovers of Modena" burial represents a voluntary expression of commitment between two individuals", the authors wrote in their study.

Since their discovery in 2009, it was assumed that they were a man and a woman, perhaps a husband and wife, but the poor preservation of the bones meant that scientists could not be certain.

But using a new technique, researchers were able to test the protein on tooth enamel to reveal the 4-6th Century AD skeletons were male.

"There are now no other examples of this type", Federico Lugli, a researcher at the University of Bologna and the lead author of the Nature study, told Rai News.

They discovered the pair, buried in the necropolis in Italy, were both in fact male. "In the past, several graves were found with pairs of individuals laid hand in hand, but in all cases, it was a man and a woman".

Researchers have found that a couple of skeletons known as the Lovers of Modena, because they are holding hands, were both men. There have been other cases in Greece, Turkey, Romania and Siberia.

"Although we can not exclude that these two individuals were actually in love, it is unlikely that people who buried them chose to show such bond by positioning their bodies hand in hand", they conclude. "We believe that this choice symbolizes a particular relationship between the individuals, but we do not know which type", explained Lugli, adding that the notion of the two being a romantic couple seems to be far from the truth.

Archaeologists have unearthed examples of ancient male-female pairs that were buried holding hands. Christian society at the time would likely have "frowned upon" homosexual love. They could be siblings, cousins or just soldiers who died together in battle.

"The two "Lovers" could have been war comrades or friends, who died together during a skirmish and were buried within the same grave".

Remains of the so-called "Lovers of Modena".