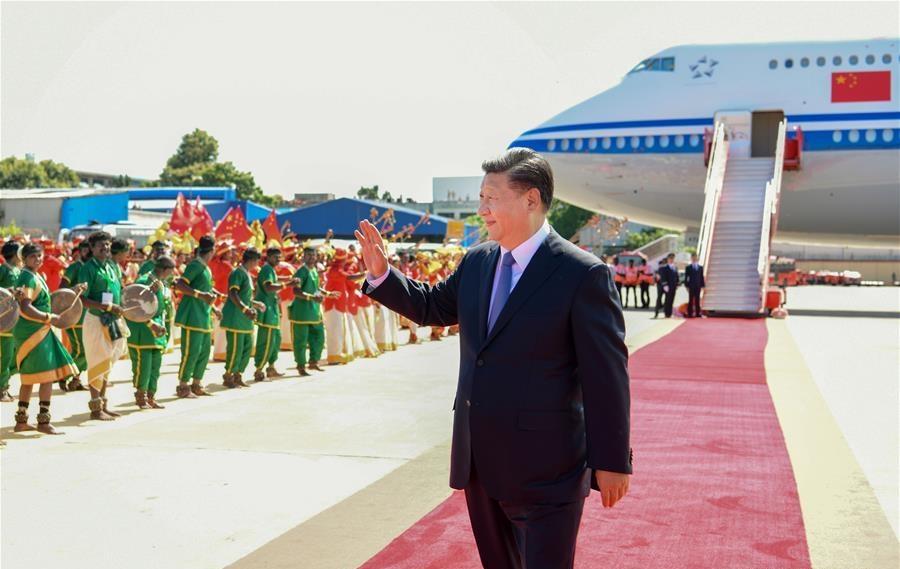 Xi given warm welcome in India

Mr. Xi, who was in Mamallapuram for the second "informal summit" with Prime Minister Narendra Modi, pointed out that both India and China, neighbours and important to each other, "are the only two countries with over 1 billion people". It was followed by delegation level talks.

The two leaders met for the second time in 18 months in a bid to ease tensions over border disputes, the troubled Kashmir region and China's domination of trade between their huge economies.

The leaders reiterated the consensus reached during the first Informal Summit in Wuhan, China, in April 2018, that India and China are factors for stability in the current worldwide landscape and that both side will prudently manage their differences and not allow differences on any issue to become disputes.

Modi said the Wuhan summit had given "increased stability and fresh momentum to our relationship".

"Our Chennai vision today has launched a new era of cooperation between our two countries", he added.

"We engaged in a candid discussion as friends in this heart-to-heart discussion on bilateral relations", Xi added.

The US has asked its allies not to use Huawei equipment, which it says China could exploit for spying.

Mr. Modi and Mr. Xi had also urged the special representatives of the two countries to "continue their efforts to arrive at a mutually-agreed framework for a fair, reasonable and mutually acceptable settlement [of outstanding issues including on the boundary question] based on Political Parameters and Guiding Principles that were agreed by the two sides in 2005", the MEA said in its release.

According to India's Commerce Ministry, India's exports to China amounted to $13.33 billion in the 2018 financial year, compared with imports of $76.38 billion.

"If we can speak on the basis of larger concerns between us, then it would be a significant voice that would be heard on the global stage, of two of the largest countries in the world working together", he said.

India and China share a almost 4,000 km border, most of which is disputed.

Modi said both countries have made a decision to be sensitive to each other's concerns as he and Xi sat down for delegation-level talks on Saturday in the seaside temple town of Mamallapuram. "Prime Minister Modi said that he looked forward to this, but believed that there should be a balance between trading goods and services".

India plans to run 5G trials soon and Huawei is expected to team up with Airtel and Vodafone for this.

Both leaders agreed that peace and tranquillity had been maintained at the border over the a year ago since the Wuhan summit, when they had given "strategic guidance" to the two militaries, as per the Indian official.

Mr Xi flew into the southern city of Chennai, from where Mr Modi was to take him on a tour of the nearby Shore Temple dating back to the seventh and eighth centuries, when regional kingdoms had direct ties with Chinese provinces. China is pressing for a greater share of Nepal's infrastructure projects.

Owning a dog could help you live longer, new research suggests
It's plausible that such physical and mental health benefits are the pathway by which dog ownership makes a person live longer. Solitary people typically don't exercise, but having a dog forces people to go outside and have a walk at least once per day.
Saturday, October 12, 2019

Saudi Arabia's oil output fell in September after attacks
Prices were also weighed down by a report of rising stockpiles in the United States, now the world's biggest oil producer. Commerzbank analyst Carsten Fritsch said if the U.S.
Saturday, October 12, 2019