Home / Science / The smallest dwarf planet to be discovered 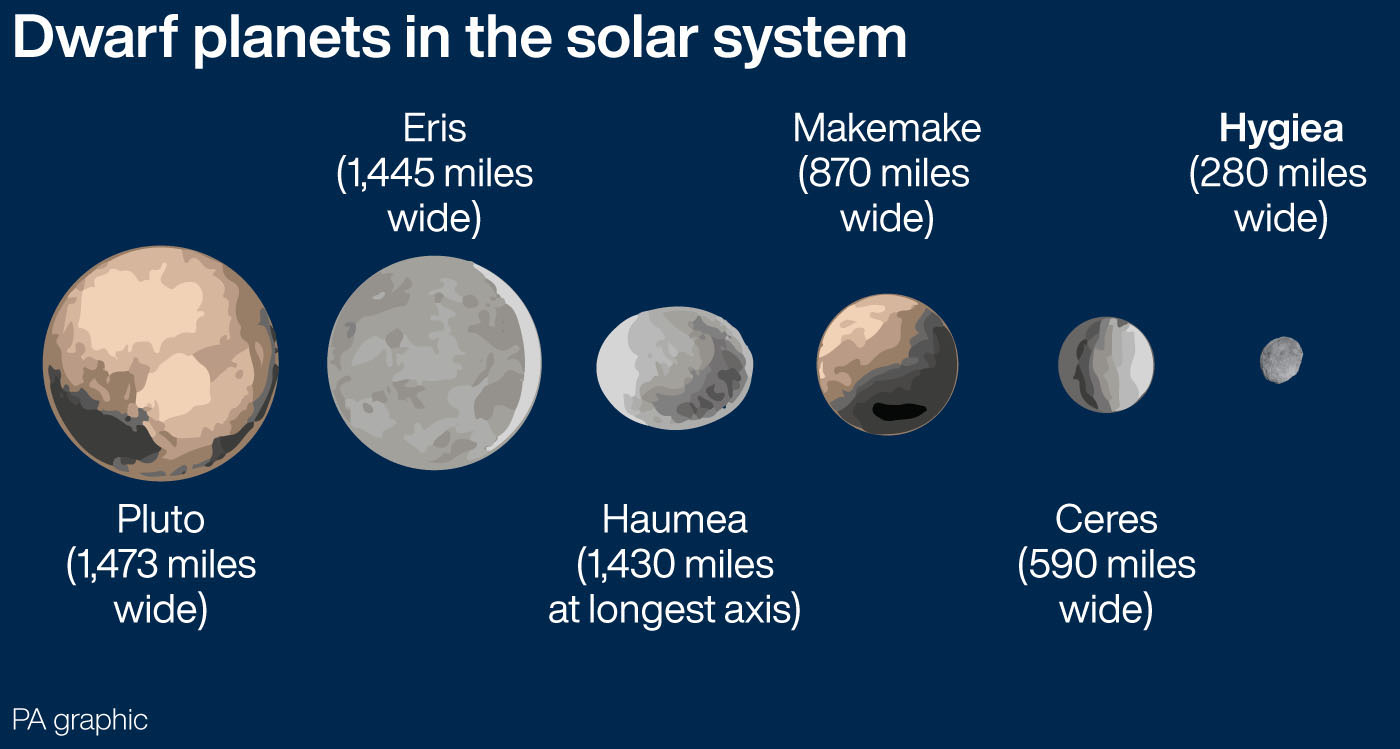 The smallest dwarf planet to be discovered

The discovery of Hygiea was possible thanks to the SPHERE instrument on the European Southern Observatory's (ESO) Very Large Telescope (VLT) in Chile. The most famous dwarf planet, Pluto, has a diameter of nearly 2400km, while the previous smallest dwarf planet, Ceres, was close to 950km in size.

A team of astronomers, after analyzing the surface, shape, and size of Hygiea, a space body in the asteroid belt between Mars and Jupiter has confirmed that this rogue body could not be an asteroid, but could be most probably the smallest dwarf planet in the solar system. Upon taking additional measurements of Hygiea with the SPHERE instrument attached to the VLT (Very Large Telescope) in Chili's Atacama Desert, the scientists have revised some of our metrics and measurements for the dark asteroid - and in the process, raised the idea that it may be the smallest dwarf planet in the solar system. The ESO team says that Hygiea meets three of four requirements to be classified as a dwarf planet.

It orbits the Sun, and not another planet, so that rules it out from being a Moon. The final requirement is that it has enough mass that its own gravity pulls it into a roughly spherical shape.

The team also found-unexpectedly-that Hygiea lacks impact craters on its surface, finding just two over 95 percent of the asteroid's surface.

There are now five dwarf planets - Pluto, Eris, Haumea, Makemake and Ceres. Instead, they were expecting to find a large impact crater. Observing Hygiea with ground-based equipment showed that the asteroid looks nearly as round as Ceres, with no sign of the mammoth impact craters that have deformed objects like Vesta. As for Hygiea, the fourth largest asteroid in the asteroid belt, it likely originated with Ceres around two billion years ago.

Using computer simulations, the researchers showed that the Hygiea family of asteroids could have been spawned by a massive head-on collision with an object measuring between 75 to 150 kilometers (46 to 93 miles) in size.

"By comparing Hygiea's sphericity with that of other Solar System objects, it appears that Hygiea is almost as spherical as Ceres, opening up the possibility for this object to be reclassified as a dwarf planet", the paper said. Perhaps more importantly, Hygiea, with its relatively fresh surface, is distinguished from other main belt objects, including Vesta and Ceres, making it a compelling object for further study, and possibly even a robotic mission.

After causing an uproar, which lasts to this day, by reclassifying Pluto in 2006, the International Astronomical Union is now risking a repeat of the controversy as they consider reclassifying an asteroid as a dwarf planet.

Discovered in 1849 and named after the Greek goddess of good health and hygiene, it orbits the sun every 5.5 years and has a mean diameter of 431 kilometers, although it's slightly oblong.

At present, Ceres is now the only unambiguous dwarf planet inside Neptune's orbit. That's a pretty important dwarf-planet marker, and the only one Hygiea was missing until now. It was initially called Bourbon Hygieia, but in 1852 was simply changed to Hygiea, with a single "i". "They are too small", said Dr. Miroslav Brož, a researcher in the Astronomical Institute at the Charles University. As said before, the images show that it has the form on a sphere.

Searchers look for man seen on YouTube falling on Mount Fuji
They advised people not to climb when the iconic mountain is covered in snow because it's especially unsafe , according to NHK . The ground is covered in heavy snow, and the man tells his viewers that it is slippery and unsafe along the route.
Wednesday, October 30, 2019

Sam Burgess poised to retire from NRL
Todd Greenberg , the NRL's chief executive, said on Tuesday it would be a shame not to see Burgess run out again next year. Damien Cook, Cameron Murray and Adam Reynolds are expected to be the leading contenders to assume the role.
Wednesday, October 30, 2019

Backpacker tax unlawful, rules federal court
This was due to treaties which required Australia to tax those foreign nationals in the same way as local workers. Roughly 150,000 foreign nationals travel to Australia every year on working holiday visas.
Wednesday, October 30, 2019