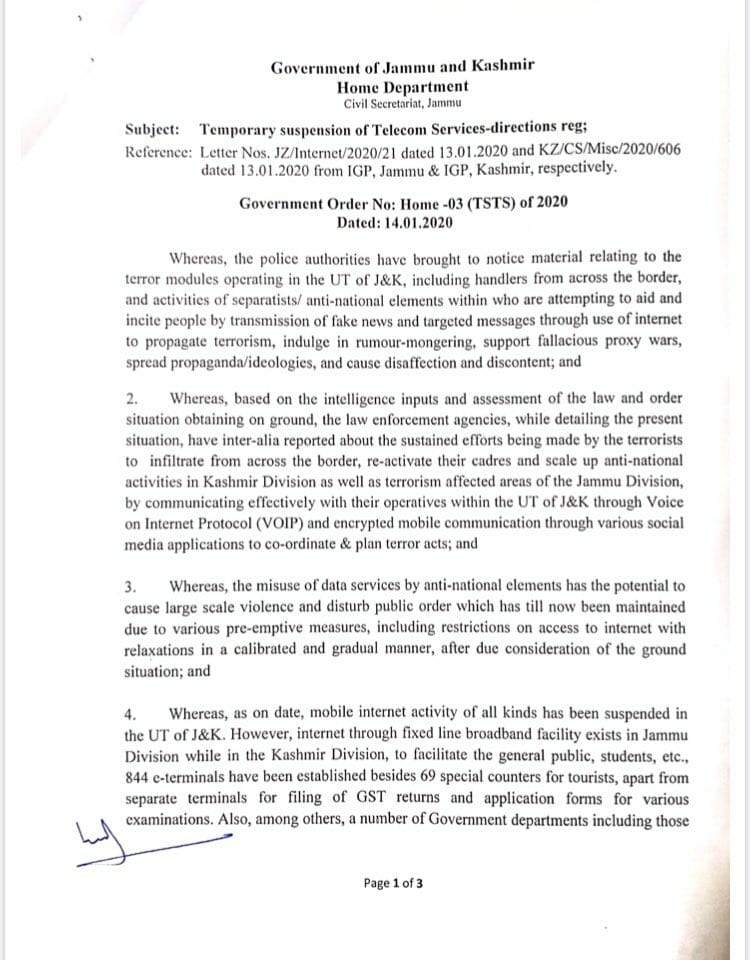 Members of the Union Council of Ministers will visit Jammu and Kashmir later this week in order to spread word about government policies "particularly in the last five months after the abrogation of Article 370". The process, which will be conducted in phases, will start today.

On January 10, the Supreme Court had ordered the restoration of Internet for all essential services in J&K.

"Prior to giving such facility, the service providers have been asked to install necessary firewalls and carry out white-listing of sites that would enable government websites and website dealing with essential services like e-banking", the order said.

However, personal broadband connections and all access to social media sites remained banned.

The order also said that the 2G mobile connectivity on post-paid mobiles for accessing white-listed websites including e-banking will be opened in the Jammu, Samba, Kathua, and Reasi districts of the Jammu region.

All mobile and broadband internet connections have been suspended in Kashmir since 5 August, when the BJP government, led by Narendra Modi, revoked the decades-long special status of Jammu and Kashmir, which had given the region autonomy, and split the state into two territories under the direct control of Delhi.

In line with earlier orders imposing stringent conditions while restoring internet access to government departments, those institutions and government offices, where broadband services will resume, have been made responsible for any "misuse".

The administration's order on Tuesday said the institutions and government offices being provided internet would need take measures to prevent its misuse.

Mentioning the Supreme Court's verdict last week, the order says the fresh directions were issued after "taking into account the ground situation and considering the available alternative measures, in light of the reports of the authorised officers, subject to a detailed review that is being undertaken..." This, the court said, should be done within a week.

It had asked the J-K administration to restore Internet services in institutions such as hospitals and educational places providing essential services.

The bench also held that internet shutdowns can not be ordered to suppress speech unless there is incitement to violence or similar reasons.

"Suspension of free movement, Internet and basic freedoms can not be an arbitrary exercise of power", the court said. "It can't be used as a tool to oppress difference of opinion", the court said.

The order also said that based on the intelligence inputs and assessment of the law and order situation obtaining on ground,"the law enforcement agencies have inter-alia reported about the sustained efforts being made by the terrorists to infiltrate from across the border, re-activate their cadres and scale up anti-national activities in Kashmir Division as well as terrorism affected areas of the Jammu Division, by communicating effectively with their operatives through Voice on Internet Protocol (VOIP) and encrypted mobile communication through various social media applications to co ordinate and plan terror acts".

'Friends' actor Stan Kirsch passes away
Kirsch was recently working as an acting coach in Los Angeles and running an acting studio in Hollywood with his wife. He appeared on the Friends' episode as Ethan - one of Monica's dates, who she later discovers is only in high school.
Wednesday, January 15, 2020

Doubles player Robert Farah tests positive for banned steroid
The player said he is going through " the saddest moment in his life ", blaming Colombian meat for the failed test. He adds that the levels cited were "incredibly low" and didn't provide a "performance-enhancing benefit".
Wednesday, January 15, 2020