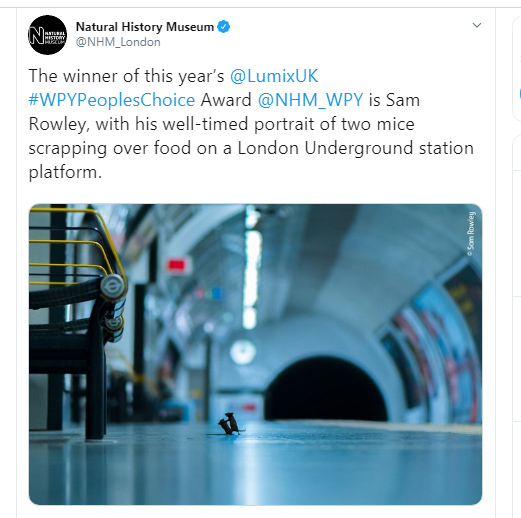 Titled "Station squabble", Sam Rowley's photograph of two mice apparently fighting over leftover crumbs has been voted the victor of the Wildlife Photographer of the Year LUMIX People's Choice Award. Even the rodents' conflict is person-centric: The morsel that attracted them was once in human hands.

"Sam's image provides a fascinating glimpse into how wildlife functions in a human-dominated environment", he said.

"I think it's well done because of its capacity for relationship", he said in an email.

The 56th WPY competition is now being judged by a panel of experts, and its grand prize winners will be revealed in October.

Rowley told National History Museum that it was challenging capturing the moment.

"Many have confessed to enjoy watching them scurry around the otherwise boring station platform", Rowley said in a press release.

Another wrote, "That is incredible!" "However, until people vote with their feet and don't visit venues that exploit animals in this way, the shows will continue".

Any photographer would tell you that the key to capturing a picture-perfect moment is 90 per cent patience and 10 per cent luck.

Elias Mugambi, a ranger at the Lewa Wildlife Conservancy in Kenya, spends weeks away from his family caring for orphaned black rhinos.

"Matching outfits" by Michel Zoghzoghi which shows a jaguar and her cub holding an anaconda in the Pantanal, Brazil.

"The conditions for photographing at the Norwegian archipelago Svalbard are extreme, but wildlife has adapted to the environment and its freezing temperatures".

A picture of a pair of mice battling each other for some food has won the People's Choice award in the Wildlife Photographer of the Year contest. This year, there were nearly 50,000 entries sent in by some of the world's best photographers to be selected by a panel of worldwide experts.

The award is now in its 55th year and is organized by the Natural History Museum in London as a way to showcase nature photography and highlight the photographers who capture wildlife.

Michael Bloomberg's meme campaign is becoming its own meme
The social media strategy is part of Bloomberg's plan to try to hijack the Democratic primary by flooding media with ads. The Bloomberg campaign declined to say how much it paid for the sponsored posts, or if it had more of them in the works.
Friday, February 14, 2020