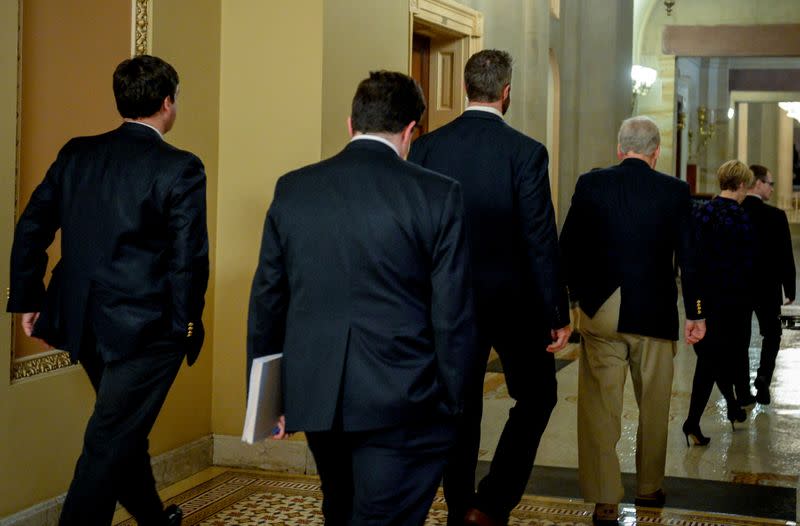 It seems, however, unlikely that any legislation will be voted ono the Senate on Monday as Schumer and Treasury Secretary Steve Mnuchin continue to work out a version of the bill that will appease both sides.

"This is not a juicy political opportunity".

Senate Democratic Leader Chuck Schumer said the package needed more guardrails to avoid misuse of the $500 billion earmarked to help struggling industries. "They're looking to us to solve this problem", McConnell said. He also warned that he viewed an upcoming procedural vote to advance the package as "irrelevant" before negotiations were done. But Democrats countered that they had been left out of some negotiations and the GOP leadership was trying to rush through a bill that would have little chance in the Democrat-controlled House.

Democrats said the Republican plan did not provide enough money for states and hospitals, lacked sufficient aid for unemployed Americans and did not include adequate supervision of a massive fund to aid big businesses.

Bourne said if the bill included more flexibility for households and working families "relative to the amount that Republicans want to be sent to large businesses", and more controls on how corporations can spend the funds, then Democrats would likely vote for it. "That's the expectation, that we will finish it tomorrow and hopefully vote on it tomorrow", Schumer told reporters.

"His folks are hip-deep negotiating with Mnuchin, which is a good sign", Democratic Senator Chris Coons said.

But the coronavirus has trimmed their ranks, giving Democrats even more leverage.

House Speaker Nancy Pelosi, D-Calif., is going to introduce a counterproposal in the House on Monday afternoon. It's unclear whether Pelosi's move is a pressure tactic on the Senate to reach a deal or a firm commitment to move a House bill.

As more lawmakers test positive for the virus and even more self-quarantine because of possible exposure, Congress itself is racing a clock to pass a bill and likely recess for at least a few weeks.

One "big change" in the negotiations that Pelosi highlighted was the fact that Senate Republicans and the Trump administration agreed to House Democrats' oversight language for the $500 billion fund created to help impacted industries. It focuses on direct payments to Americans, paid leave for workers and child tax credits, among other efforts, she said. "We must be bold and forward looking in our thinking. swift and evidence based in our actions, and we must be prayerful".