Home / Economy / Coronavirus: What does Victoria's State of Disaster mean for you? 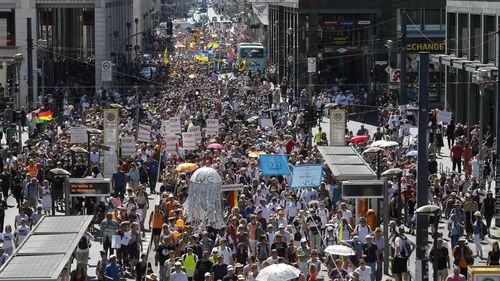 In a press conference on Sunday afternoon, Andrews made the call to declare Victoria a state of disaster as stay at home restrictions are enhanced.

The announcement caps an intensely hard year for the state; Victoria last used its state of disaster distinction when bushfires were tearing through much of the region at the turn of the year.

Punishments for flouting the restrictions have also not been confirmed, however Mr Andrews said that anyone who breaks curfew risks being fined $1652 on the spot or facing a $10,000 fine in court.

As a result of rising coronavirus cases in Victoria, a curfew has now been introduced between 8pm and 5am every day in Melbourne.

"We need to see those numbers through the eyes of our healthcare workers and the kind of very bad fear that they have about what it means for people presenting to hospital", he said.

"We have no choice but to make these decisions and to push on", Andrews said.

The premier has been frustrated by people disobeying public health orders, including positive cases who weren't home when defence force members came knocking.

Furthermore, only one person per household will be able to go grocery shopping once per day, and they will be required to remain within 5km of their home.

Recreational activity has been banned and outdoor exercise limited to one hour each day.

Regional Victoria will move to "stage three" restrictions, with restaurants, cafes, bars, gyms and other businesses to shut from midnight on Wednesday.

In terms of both shared custody and intimate partners, Andrews confirmed that "things like 5 kilometre rules and reasons to leave your home, they don't apply in those circumstances". They will be limited to an hour of exercise a day. For example if you live more than five kilometres from your closest supermarket or if you have children that can't be left at home.

The measures will not affect work, medical care or compassionate circumstances and could be in place for at least six weeks, however the premier did not confirm the exact length of the measures.

The Mitchell Shire, north of Melbourne, will stay on the same stage three restrictions it has been on for almost three weeks. "But it is not working fast enough".

Victoria's school, TAFE and university students will need to retun to remote learning. The butcher, grocer, bakery will remain open.

"Intricate and complex supply chains. I'm not making any commitments on that and not suggesting if we got to a certain threshold we'd be able to go back to these restrictions prior to me standing up today or another level", he said, according to the Guardian.

"Forty-nine doesn't necessarily seem such a large number but 49 mysteries when it could be much more than that because you can't find who that original case was, that is a significant concern to us".

"Anything that's shut down here can have knock-on effects and consequences well beyond our state". "Tomorrow I'll make further announcements about how we work".

A delay in US 2020 election results does not mean fraud
Hyper Scape Season 1 launches next month, beta ends August 2

B.C. launches 'Dr. Bonnie Henry's Good Times Guide'
There have also been 63 cases identified in B.C. involving people who reside outside of Canada. "We can make this B.C. They also announced a new outbreak at a long-term care home in the Fraser Health Region: Dania Home in Burnaby.
Sunday, August 02, 2020

Harvey Updyke, who poisoned trees in Toomer's Corner, dies at 71
Updyke used a potent herbicide known as Spike 80DF to poison the trees. "They're not dead yet, but they definitely will die". Harvey Updyke , the man who poisoned Toomer's Oak Trees at Auburn University has died at the age of 71.
Sunday, August 02, 2020