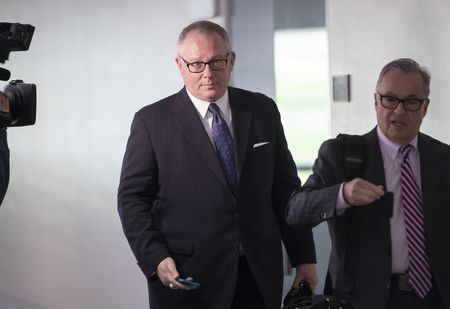 Sen. Patty Murray late Monday night demanded the immediate firing of Michael Caputo, the top communications official at the Health and Human Services Department, after the former Trump campaign aide over the weekend launched into an unhinged tirade accusing CDC scientists of "sedition" against the president and urging White House supporters to "buy ammunition" in preparation for a post-election conflict. But in a 45-minute phone conversation with CBS News, Caputo said the Times' article is missing context for some of his comments.

Caputo and his team have attempted to add caveats to the CDC's findings, including an effort to retroactively change agency reports that they said wrongly inflated the risks of Covid-19 and should have made clear that Americans sickened by the virus may have been infected due to their own behavior, according to the individuals familiar with the situation and emails reviewed by POLITICO.

At one point during the Facebook Live session in which Caputo made the comments, he said that "there are hit squads being trained all over this country" to prevent a second term for Mr. Trump.

But Caputo said the combination of dealing with threats and harassment against him and his family, in addition to working on the coronavirus, has taken a toll on him, adding that constantly having to talk about death and despair is very hard.

CDC scientists "haven't gotten out of their sweatpants except for meetings at coffee shops" to decide "how they're going to attack Donald Trump next", Caputo said, according to the New York Times.

"During the pandemic, experts have relied on these reports to determine how the virus spreads and who is at greatest risk", House Select Subcommittee on the Coronavirus Crisis chair Rep. Jim Clyburn and his Democratic colleagues wrote in a letter to Health and Human Services (HHS) Secretary Alex Azar and CDC director Robert Redfield.

According to a report in Politico, Caputo, along with scientific adviser Paul Alexander, pressured officials to alter the CDC's Morbidity and Mortality Weekly Reports, a long-running weekly journal that features the latest science-based research and data on infectious diseases.

The officials pressured CDC to change the reports, at times retroactively, to better align them with Trump's often rosier public statements about the coronavirus, Politico reported.

"It is clear Secretary Azar can not meet his basic responsibilities while allowing Michael A. Caputo, a yes-man for President Trump with no scientific expertise who publicly attacked CDC scientists and privately interfered with key CDC reports, to continue serving in such an influential role", Murray continued.

According to Politico, Caputo and Alexander complained about a report that explained children can transmit the coronavirus and Alexander asked the CDC to alter it or pull it down, saying the report could impact school reopening and hurt Trump politically.

"You understand that they're going to have to kill me, and unfortunately, I think that's where this is going", he said in the video, according to the Times.

Trump to host Israeli, Arab leaders for historic peace signing
Israel, Bahrain and the UAE are expected to sign a trilateral document, in addition to the bilateral agreements. But US Democrats and regional experts say a true chance at peace must include the Palestinians.
Tuesday, September 15, 2020