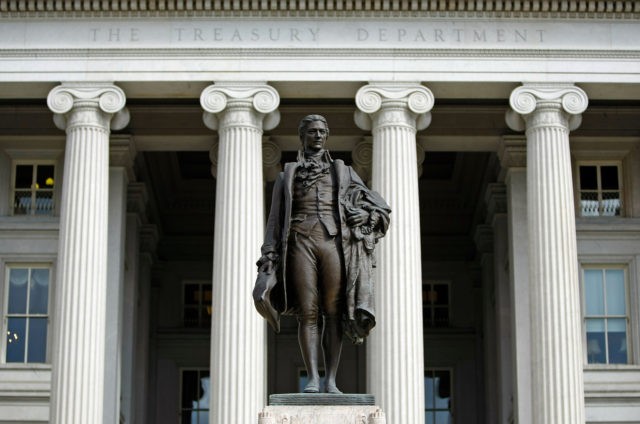 On Wednesday, Trump told the New York Economic Club that reducing the federal debt would be a priority of his second administration even as he urges Congress to spend more than $1.8 trillion on an additional relief package. Interest rates are low, which has made it relatively affordable to issue debt.

Up until March, the budget gap for 2020 largely mirrored the shortfall during the same period of 2019. The Federal Reserve has indicated it will hold interest rates near zero through at least 2023, ensuring low borrowing costs for the government.

Treasury secretary Steve Mnuchin and House Speaker Nancy Pelosi are now locked in negotiations regarding another round of stimulus to breathe life into an economic recovering that appears to be stalling. Total federal debt stood at more than $27 trillion. "Now that policymakers are enacting necessary, emergency measures to combat the crisis, federal budget deficits are escalating to levels not seen since World War II".

When the government spends more than it collects in taxes-as it has almost every year in recent decades, apart from a brief surplus in the late 1990s-it turns to investors to borrow funds.

Budget deficit for the fiscal year, which ended September 30, was $2.1 trillion higher than that of the prior year, according to the final budget results for fiscal year 2020 jointly released by Treasury Department and White House Office of Management and Budget on Friday. Indeed, the USA government appears to be far from the limits of its borrowing capacity and the Federal Reserve does not think inflation will rise to its two-percent target for years to come. A federal unemployment benefit for millions has expired, and economists warn that the recovery could be stalled or setback by prematurely ending government aid programs.

September expenditures increased by 206 billion dollars from the previous year, to 498 billion dollars, due to the spending associated with the spread of the new Corona virus.

Much of the spending increase can be tied to efforts to mitigate the economic downturn that resulted from the pandemic, officials said. The yield on the 10-year Treasury is down 57 percent from the expiration of the last fiscal year.

Spending for other safety-net programs, including Medicaid, Social Security and nutrition assistance, also climbed, along with outlays for new programs such as the coronavirus relief fund for cities and states and one-time $1,200 stimulus payments to households.

The U.S. government considers money taken from workers and businesses through the tax system to be "revenue", although unlike private sector revenue it is received not through voluntary sales transactions but mandatory collections.

While about half of the 22 million jobs lost in March and April have been recovered, the concern is that without more government support, those still without work will be unable to make their rent or mortgage payments and buy food.

This article was corrected at 5:48 p.m. ET because the original version incorrectly said that William Hoagland is a senior fellow at the Bipartisan Policy Center.

BA fine for losing customers' credit card details dropped by £163m
The fine is considerably smaller than the £183m that the ICO originally said it meant to issue back in 2019, reports BBC . In April, BA announced plans to cut up to 10,000 jobs, 30 per cent of its global workforce.
Sunday, October 18, 2020

Kate Middleton spotted off-duty in London - wearing STUNNING Zara dress
The royals also saluted the teachers and staff and told them they were doing an wonderful job. They correctly identified a sketch of a birthday and a picture of the sport cricket.
Sunday, October 18, 2020