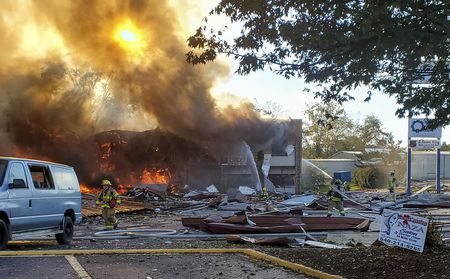 A firefighter walks through the burning rubble of a shopping center after an explosion in Harrisonburg, Va., Saturday, Oct. 17, 2020.

Five people including three college students were injured in a gas explosion at a strip mall in Harrisonburg, Virginia, on Saturday morning, local media reported.

Among the victims were three James Madison University students who suffered minor injuries. Two other students were at the scene, but were treated and released immediately.

The university said the other two injured people were not affiliated with JMU.

Around 8:30 a.m., the building caught fire, sending large plumes of smoke into the air. 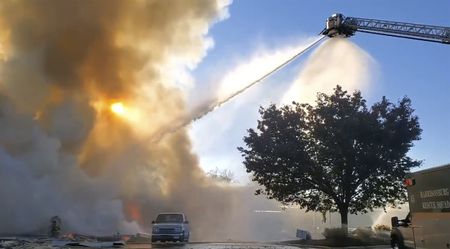 Tobia said when crews arrived, the injured were outside of the structure. Videos from the scene show serious damage to the commercial area.

Although Gov. Ralph Northam tweeted that state emergency personnel had been deployed to the area after what he called a gas explosion, Harrisonburg Fire Chief Matt Tobia told reporters the cause was under investigation.

Residents as far as Dayton, some 5 miles away, and Weyers Cave, about 13 miles away, claimed to have felt or heard the explosion, according to WHSV News.

Peter Aitken is a NY born-and-raised reporter with a focus on national and global news.

Pfizer CEO: We can't pursue COVID-19 vaccine approval until late November
Companies backed by their governments in China, Russia and the United States are racing to be the first across the finish line. Trials of two candidate vaccines - made by Johnson & Johnson and Eli Lilly - were "paused" recently over safety concerns.
Sunday, October 18, 2020