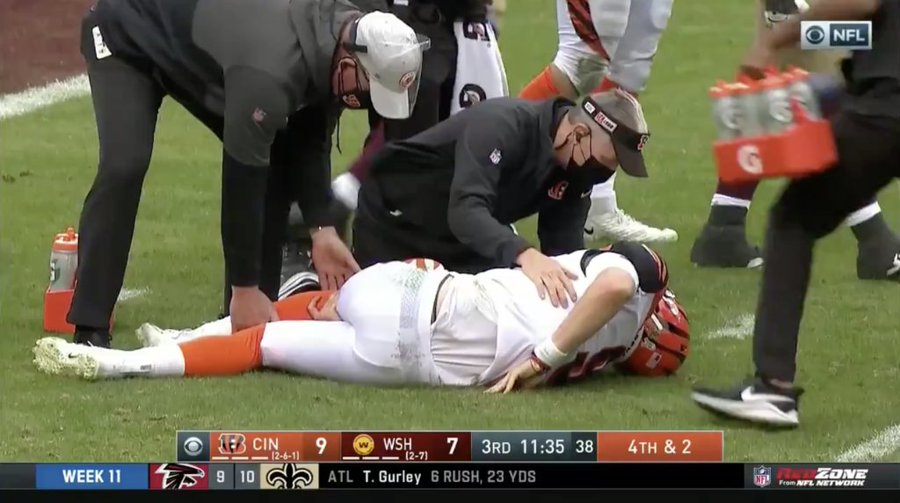 Washington defenders Jonathan Allen and Montez Sweat sandwiched Burrow after he threw a pass intended for Tyler Boyd. Burrow grabbed at his left leg and appeared to be in enormous pain as trainers attended to him on the field. Players from both teams stayed out of the field as he was taken off.

Through nine starts entering today, Burrow has completed 242 of 370 passes (65.4 percent) for 2,485 yards and 12 touchdowns to five interceptions while adding three rushing scores.

After the Bengals confirmed via Twitter that Burrow wouldn't return to the game Burrow himself tweeted a message to fans.

However, the No. 1 pick had taken a beating even before this game, getting sacked 32 times and hit 72 times coming in.

You can see video of the play Burrow was hit on below.

Lockdown: England to get tougher three-tiered system after national lockdown
According to the Daily Telegraph , several families could be allowed to join in one "bubble" and mix between 22 and 28 December. She called for clarity about what economic support package would accompany different types of restrictions.
Sunday, November 22, 2020

Man arrested after woman pushed onto New York City subway tracks
Sagbaicela, a housekeeper who lives in Sunset Park, Brooklyn, said she thought she had fainted and fallen onto the tracks. Her 14-year-old daughter, Mia Llanos goes to high school in the city and takes the same train to the same stop.
Sunday, November 22, 2020