Home / Science / Jupiter's moon Europa may glow in the dark 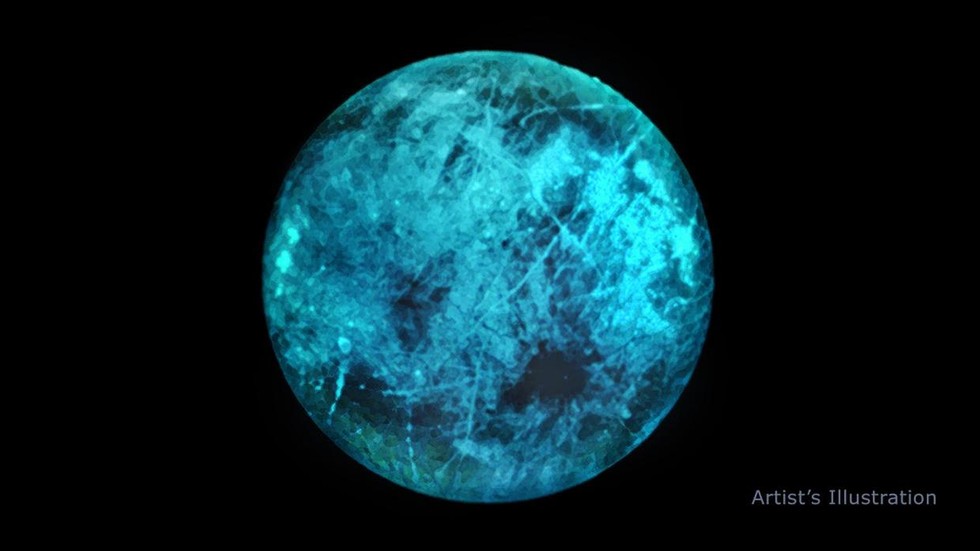 In a first of its kind study, scientists from NASA's Jet Propulsion Laboratory demonstrated what Europa's glow may appear like, and expounded the potential revelation it could lead to about the ice on the moon's surface and about its composition. From surface research, scientists can do deeper research on the elements below. Most observations using a spectrometer on a moon like Europa are taken using reflected sunlight on the moon's dayside, but these new results illuminate what Europa would look like in the dark.

"We were able to predict that this nightside ice glow could provide additional information on Europa's surface composition".

ICE-HEART was created to replicate the various types of ice present on Europa's surface - sodium salts, magnesium salts, and so on.

Europa is a little smaller than Earth's moon, making it the smallest of Jupiter's four Galilean moons, all of which are so-named in honor of their discoverer, the pioneering astronomer Galileo Galilei. Its radiation would kill a human being on Europa's surface in a few seconds.

An upcoming mission by NASA's Europa Clipper spacecraft, which is expected to launch later this decade, could observe the glow and map the chemical composition of Europa's surface by measuring how much ice glow is seen at different wavelengths, the authors of the study said.

Different chemical reactions are taking place on and beneath the surface of Jupiter, as items react to the intense barrage of radiation, according to NASA.

It is also believed that Europa harbors an enormous interior ocean that could make its way through the thick ice crust and on to the surface.

"But also, if the surface glows, that's just cool", Niebur tells National Geographic. "The nighttime ice glow occurring on Europa may be very unique and unlike any other phenomenon in our solar system", per the study.

"Imagine a full coconut, with its hard shell outside and then coconut meat (which are similar to Europa's ice shell) and then inside we have water in the coconut", he said via email.

"But we never imagined that we would see what we ended up seeing", said JPL's Bryana Henderson, who co-authored the research. After experimenting with snow of different compositions, the brightness also looked different.

The researchers built an instrument called Ice Chamber for Europa's High-Energy Electron and Radiation Environment Testing, which they took to an electron-beam facility in Maryland.

Initially, the team was interested in studying the effects of high-energy radiation on organic compounds under the ice. After arriving in orbit of Europa in 2030, it will conduct multiple flybys that give it the opportunity to check for any possible glow in the dark effects.

The scientists haven't yet observed the actual glow from Europa. Now NASA is set to send its mission to Europa Clipper in the 2020s.

Journal Reference: Laboratory predictions for the night-side surface ice glow of Europa, Nature Astronomy (2020). Mission scientists are reviewing the authors' findings to evaluate if a glow would be detectable by the spacecraft's science instruments.

"Understanding its chemistry, the composition of the ocean, is an important piece of the puzzle to understanding whether Europa could be a habitable environment", Bob Pappalardo, Europa mission project scientist at JPL, said.

"It's not often that you're in a lab and say, 'We might find this when we get there.' Usually it's the other way around - you go there and find something and try to explain it in the lab".

The new findings will be significant for future studies aiming to understand if Europa could host life.

Europa is considered one of the top potential sites for life elsewhere in the solar system.

Almost 20% of COVID-19 Survivors Develop Mental Illness, Study Finds
People who had previously been diagnosed with mental health problems were 65 percent more likely to test positive for COVID-19. The researchers wanted to see if COVID-19 patients were more or less likely to suffer from mental health complications.
Thursday, November 12, 2020

Trump Fires Defense Secretary Mark Esper
Patel was among the small group of aides who travelled with Trump extensively during the final stretch of the campaign. Officials who carry the "acting" title have more authority than those who are "performing the duties of" the job.
Thursday, November 12, 2020

Arkansas coach to miss Florida game with COVID-19
Pittman's positive test came during scheduled Sunday testing for the football team, which is tested three times each week. The Razorbacks are off to a 3-3 start in Pittman's first year - a significant jump from last year's 2-10 campaign.
Thursday, November 12, 2020