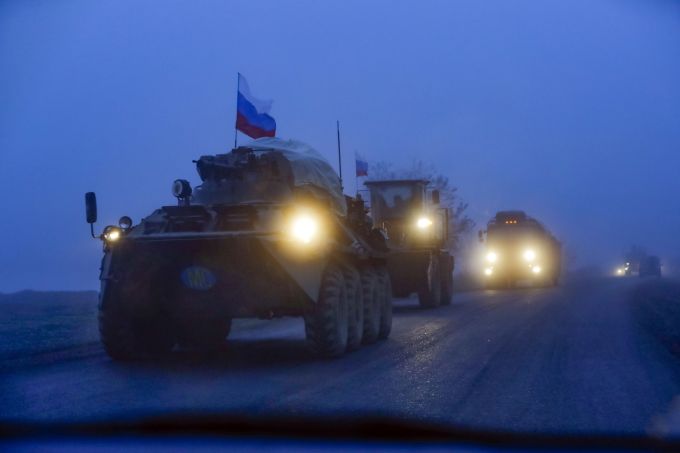 Azerbaijan's military says it has entered the Agdam district of the Nagorno-Karabakh region under a deal in which that territory was formally ceded by Armenia to Azerbaijan. Armenians are forced to leave their homes before the region is handed over to control by Azerbaijani forces.

The longstanding ex-Soviet rivals finally agreed to end hostilities last week under the framework of a Russian-brokered accord that sees Moscow deploy peacekeepers to the region and requires Armenia to cede swathes of territory.

A smoke rises from a burning house in Karmiravan village as ethnic Armenians leaving the the area, prior to the Azerbaijani forces being handed control in the separatist region of Nagorno-Karabakh, Thursday, Nov. 19, 2020.

The handover of Agdham, which was captured by Armenian forces in July 1993 during the First Nagorno-Karabakh War, will be followed by the Kalbajar district, wedged between Nagorno-Karabakh and Armenia, on November 25, and the Lachin district by December 1.

"Units of the Azerbaijan Army entered the Aghdam region on November 20", the Defense Ministry in Baku said, referring to one of three districts that will change hands over the next two weeks. 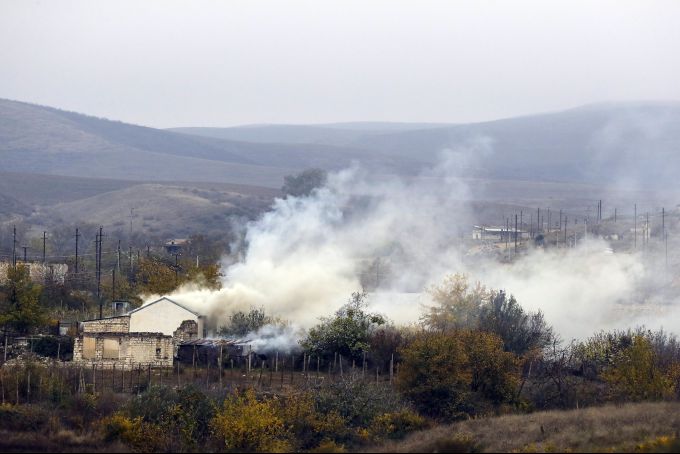 Armenian forces occupied some 77 percent of Aghdam in 1993, forcibly displacing almost 200,000 Azerbaijanis from their homeland. The town, which was home to over 30,000 people at the time of the break-up of the Soviet Union in 1991, found itself in between warring Azerbaijan and its breakaway region.

The Kremlin has poured cold water on Ankara's hopes of deploying peacekeepers alongside Russian troops in Nagorno-Karabakh and surrounding provinces and instead insisted that Turkey would observe the truce from monitoring posts in Azerbaijan.

Russia's decisive role in the settlement has sidelined global players the United States and France, which brokered a ceasefire in the 1990s but failed to deliver a long-term resolution.

Thousands are demanding Pashinyan quits following the signing of a peace deal that secured territorial advances for Azerbaijan in Nagorno-Karabakh after six weeks of fighting.

Since the ceasefire, Russian Federation has held talks with Turkey, a key Azerbaijani ally and a harsh critic of the Minsk group, that could lead to Ankara deploying troops to the region. Besides, Armenia and Azerbaijan should carry out the exchange of prisoners of war and the bodies of those killed.

Virus infection creates immunity for at least six months
Some reports have shown people are most infectious just before they have symptoms and in the first week of having the virus. As well as looking at the behaviour of SARS-CoV-2, the researchers also assessed two related coronaviruses , MERS and SARS.
Friday, November 20, 2020

Wizards select Deni Avdija with No. 9 pick in National Basketball Association draft
David Wiseman, originally from Australia and who now lives in Israel, maintains the Facebook Group "Follow Team Israel". At the end of my career, to look at it and say "I was the best Deni Avdija I can be". "Omri has been in touch with me".
Friday, November 20, 2020

Covid-19 caseload in India breaches 90-lakh mark
The Government hiked the fine for not wearing a mask four times to 2,000 rupees ($36.96) as it considered fresh restrictions. The Haryana Government said it ran out of testing kits but efforts were now being made to step up sampling.
Friday, November 20, 2020