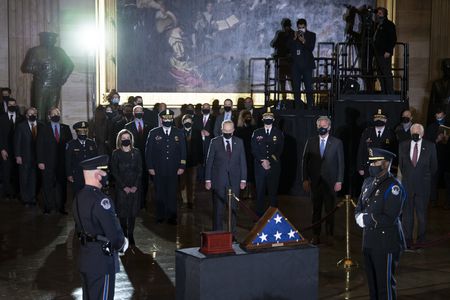 The incident led to Trump's second impeachment and next week he will face trial in the Senate on a charge of inciting insurrection. A ceremonial departure for Arlington National Cemetery was planned later in the day.

His former colleagues and congressional leaders stood in silence on a blustery winter Washington evening as two members of the police honor guard carried Sicknick's remains in a wooden urn and a folded American flag up the stairs on the Capitol's East Front and into the Rotunda. A viewing period was reserved for Capitol police overnight, with legislators to pay tribute at a ceremony on Wednesday morning. At the same time, the building has been cut off from the public, surrounded by large metal fences and defended by the National Guard. He had served with the U.S. Capitol Police since 2008. Like many of his fellow officers, he often worked security in the Capitol itself and was known to lawmakers, staff and others who passed through the building's doors each morning.

He died January 7, a day after the riot.

One possibility being considered by investigators is that Sicknick became ill after interacting with a chemical irritant like pepper spray or bear spray that was deployed in the crowd.

To date, little information has been shared publicly about the circumstances of the death of the 13-year veteran of the police force, including any findings from an autopsy that was conducted by DC's medical examiner.

Pelosi and Schumer announced last week that Sicknick would lie in honor, saying his heroism "helped save lives, defend the temple of our democracy and ensure that the Congress was not diverted from our duty to the Constitution".

"The U.S. Congress is united in grief, gratitude and solemn appreciation for the service and sacrifice of Officer Brian Sicknick", Pelosi and Schumer said in a joint statement. Federal Bureau of Investigation agents nationwide have been tracking down and arresting participants in the January 6 mob that stormed the Capitol and destroyed government property. They also targeted Vice President Mike Pence, who was in the building to preside over the electoral count.

The category of "laying in honour" was created after two Capitol police officers - Jacob Chestnut and John Gibson - were fatally wounded in 1998 by a gunman who ran to the offices of then-Majority Whip Tom DeLay.

Authorities have reviewed video and photographs that show Sicknick engaging with rioters amid the siege but have yet to identify a moment in which he suffered his fatal injuries, law enforcement officials familiar with the matter said.

Fletcher, Suri and Moores Lift Bangla Tigers Past Pune Devils
Cadmore could pick only one boundary in the fifth over from Qais Ahmad and at the halfway mark Pune were 55 for 1. Rayad Emrit ended Wright's quick knock by forcing him to hit straight to Fabian Allen at mid-wicket for 33.
Wednesday, February 03, 2021