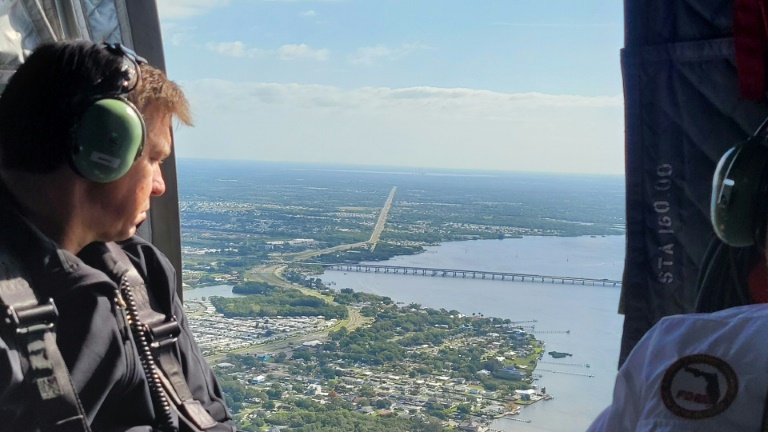 Florida Governor Ron DeSantis announced that crews are now working to avoid the collapse of a large wastewater pond in Tampa Bay while they evacuate the area to preempt a catastrophic flood.

The leak in the containment wall of the Piney Point waste water reservoir was discovered about a week ago and has since worsened - prompting Florida Governor Ron DeSantis to declare a state of emergency over concerns of the possible collapse of stacks of phosphogypsum, a waste product from manufacturing fertilizer that is radioactive.

"What we are looking at now is trying to prevent and respond to, if need be, a real catastrophic flood situation", DeSantis said at a press conference after flying over the old Piney Point phosphate mine.

The Manatee County Public Safety Department said that 316 households were within the full evacuation area as of Saturday evening. Some families were evacuated in local hotels. "We aren't expecting more than a foot of water on jail property, in the worst case scenario", Warren said. The water is slightly acidic but not to a concerning or toxic level, officials said.

The pond had begun leaking in March after which county officials began discharging water from it.

Gov. Ron DeSantis declared a state of emergency over the county Saturday.

"This is not acceptable and it's not something we will allow to persist", he said, adding that he has ordered the Florida Department of Environmental Regulation to find a permanent fix at the site. The impacts of this buildup can become unhealthy to the fish, water, as well as aquatic organisms.

According to Manatee County Administrator Scott Hopes, with new resources of the state, crews will be nearly doubling the amount of water being released from the pond and taken to Port Manatee.

Early Sunday, officials saw an increase in the water leaking out, but Hopes says it seems to have plateaued.

"Looking at the water that has been removed and the somewhat stability of the current breach, I think the team is much more comfortable today than we were yesterday", he said. He added though, that "we are not out of the critical area yet".

Hopes says that if the pond collapses, there is a risk it could destabilise the walls of other areas in the plant.

Meanwhile, Noah Valenstein, the Florida DEP Secretary said, another pond was found to have higher levels of metals. The water meets "water quality standards for marine waters with the exception of pH, total phosphorus, total nitrogen and total ammonia nitrogen", according to the Florida DEP. "So, again this is not water we want to see leaving the site", he said.

Phosphogypsum is a byproduct of fertilizer production and is considered weakly radioactive as it contains naturally occurring isotopes such as radon.

According to Hopes, once the pond sunk, it would put other parts of the plant in jeopardy.

The Center for Biological Diversity national conservation group called for the US Environmental Protection Agency to step in.

Former Jordanian crown prince under house arrest over 'coup plot'
Hamzah is the son of the late King Hussein and his fourth wife, the US-born Queen Noor. Before becoming royal court chief in 2007, he was head of the king's cabinet in 2006.
Sunday, April 04, 2021

Cases of rare blood clots identified after AstraZeneca Covid-19 jabs
Spain had restricted the vaccine for under-65s, but it reversed its decision, extending the roll-out to those over 65, on Tuesday. To date, 31,301,267 people have had a first vaccine dose in the United Kingdom and 4,948,635 have had two doses.
Sunday, April 04, 2021

MSNBC Wrongly Reported Capitol Ramming Suspect as 'White Male'
The most recent post was a YouTube video of a 2009 Louis Farrakhan speech titled, "The Crucifixion of Michael Jackson". Capitol Police officers near a auto that crashed into a barrier on Capitol Hill in Washington , Friday, April 2, 2021.
Saturday, April 03, 2021