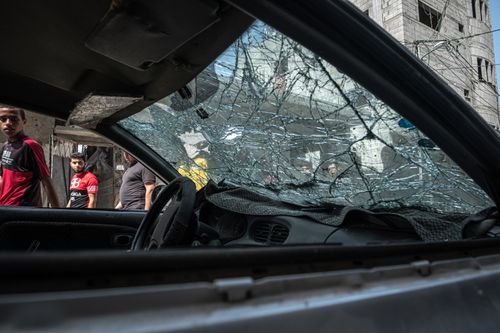 Pakistani Prime Minister Imran Khan tweeted: "We stand with Gaza and Palestine", while Turkey's President Recep Tayyip Erdogan told Russia's Vladimir Putin the global community needed to "give Israel a strong and deterrent lesson". "It is the Israeli occupation that set Jerusalem on fire, and the flames reached Gaza".

At least 67 people have been killed in Gaza since violence escalated on Monday, according to the enclave's health ministry.

As the violence intensified, Israel said it was carrying out an attack "in the Gaza Strip" although it later clarified there were no boots on the ground, blaming an "internal communication" problem for the confusion.

A stunning series of images captured early Friday depicts the intense, otherworldly battles being raged in the skies above Israel and Gaza between the rockets launched by terror groups and Israel's Iron Dome interceptors.

Biden did not explain the reasons behind his optimism.

Gaza residents near the border with Israel confirmed to Reuters that they had seen no sign of Israeli ground forces inside the enclave, but they reported heavy artillery fire and dozens of airstrikes.

"I said we would extract a very heavy price from Hamas", Prime Minister Benjamin Netanyahu said in a videotaped statement.

Since Monday, militants have fired more than 1,050 rockets from Gaza, according to the Israeli military, and Israel has conducted hundreds of strikes in the tiny territory where 2 million Palestinians have lived under a crippling Israeli-Egyptian blockade since Hamas took power in 2007.

The Israeli raids on Gaza come after weeks of mounting tension over the looming forced expulsion of Palestinian families from Sheikh Jarrah, a Palestinian neighbourhood in occupied East Jerusalem that Jewish settlers have been trying to expel them from for decades. Israeli officials said Hamas, Gaza's most powerful militant group, must be dealt a strong deterring blow before any ceasefire. Truce efforts by Egypt, Qatar and the United Nations have so far offered no sign of progress.

Beyond such local concerns, Egypt is mindful that it needs to patch fences with Mr. Biden after the departure of President Donald J. Trump, said Daniel Levy, president of the U.S./Middle East Project. Synagogues were attacked and fighting broke out on the streets, prompting Israel's president to warn of the dangers of civil war.

In Gaza, two multi-storey residential buildings and a tower housing media outlets, including one linked to Hamas, collapsed after Israel urged occupants to evacuate in advance of its air strikes, and another structure was heavily damaged.

The most intensive aerial exchanges between Israel and Hamas since a 2014 war in Gaza have prompted global concern that the situation could spiral out of control. Israel's missile defences have intercepted 90 percent of the rockets.

Bari Weiss has railed against against so-called "progressive darlings" for attacking Israel for defending itself against a "genocidal terrorist organization".

Israeli far-right groups have clashed with security forces and Arab Israelis, with television footage Wednesday airing footage of a far-right mob beating a man they considered an Arab in Bat Yam, near Tel Aviv, leaving him with serious injuries. Six Israelis were killed by rockets and many more were wounded.

USA energy corporation Chevron said it had shut down the Tamar natural gas platform off the Israeli coast as a precaution. "We have prepared for your kinds of deaths that would make you curse yourselves", he said.

"The victim of the lynching is seriously injured but stable", Tel Aviv's Ichilov hospital said in a statement, without revealing his identity.

Thursday's barrage on Tel Aviv prompted Israel to reroute an El Al flight from Brussels away from Ben Gurion, its intended destination, to Ramon Airport in the south.

Mr Gantz, appearing alongside him despite their political rivalry - both are now trying to muster majority support to head a government in Israel's deadlocked Knesset - said: "There are lots of targets lined up".

Minnesota Judge Finds Aggravating Factors In George Floyd Murder
Prosecutors had called for an upward departure, meaning a sentence longer than what's found within the guideline range. Cahill postponed the trial from August 2021 to March 2022, the Wall Street Journal and other news media reported .
Thursday, May 13, 2021

Judge: 'Aggravating Factors' Proven in Chauvin Trial
Chauvin was captured on video kneeling on the neck of 46-year-old Floyd for more than nine minutes until he passed out and died. Prosecutors sought an upward departure from that duration, arguing that there were multiple aggravating factors in the case.
Wednesday, May 12, 2021

Scottish National Party wins 4th term just short of overall majority
A similar invitation to the summit was being sent to Northern Ireland's first minister and deputy first minister, Mr Johnson said. The Conservatives' Andy Street, meanwhile, was reelected as mayor of the West Midlands, which includes the city of Birmingham.
Sunday, May 09, 2021