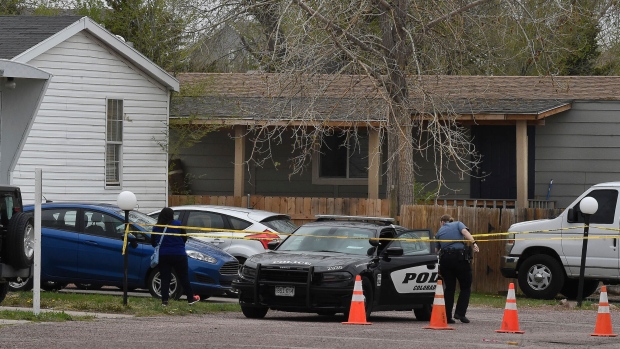 Police said the unnamed suspect "drove to the residence, walked inside and began shooting people at the party before taking his own life", but said they are still working to determine a motive.

Officers arrived at a trailer to find six dead adults and a man with serious injuries who died later at a hospital, the Colorado Springs Gazette reported. Several kids were at the party but unharmed.

The shooting happened within the Canterbury Manufactured Home Community, a mobile home park of some 470 trailers on the southeast side of town, near the Colorado Springs airport.

'Friends, family, and children were gathered inside the trailer to celebrate when the shooting occurred'.

The suspect was the boyfriend of one of the female victims. Children who were attending the party witnessed the killing spree.

"Somebody came in and shot everybody", Marquez said, relating what he had been told on the phone.

Neighbor Yenifer Reyes said that she heard the gunshots and thought they were thunder. "Then I started hearing sirens". She said because of the shooting, she will be moving out of the neighborhood as soon as possible.

The attack is the latest in a recent spate of gun-related crimes in the United States, where social activity is returning to normal as the coronavirus situation improves.

It was Colorado's worst mass shooting since a gunman killed 10 people at a Boulder supermarket March 22. The Aurora shooter is serving a life sentence.

Colorado Springs mayor John Suthers said the "senseless act of violence" had sent the community into mourning, and called for prayers for the victims, their families and the first responders.

The killings are the latest gun-related murders to rock the US; President Joe Biden has called such shootings "an global embarassment" andhas vowed to tighten restrictions on firearms.

But he faces an uphill battle in the face of opposition by gun rights advocates including Republicans and some Democrats who cite the U.S. Constitution's protection of gun ownership rights.

UK's Johnson hails electoral win as focus turns to Scotland
Reed said there had been "a breach of trust" between Labour and the electorate, that the party had been too inward looking. Results will cover local and mayoral elections across England and votes for the Scottish and Welsh parliaments.
Saturday, May 08, 2021

Ontario to provide an update on the COVID-19 vaccine rollout Wednesday
Monday marked a record day in Ontario for COVID-19 vaccine bookings as the eligibility was expanded. He said, " Vaccines are part of the answer, but they are not the only answer".
Wednesday, May 05, 2021

25-year-old British-Pakistani woman murdered at friends house in Lahore
A bullet had been fired near Zulfiqar's neck and scars have been found on her body, according to a preliminary post-mortem report. Supt Sayyed said they had also contacted the parents and other family members of the deceased overseas to get details from them.
Wednesday, May 05, 2021