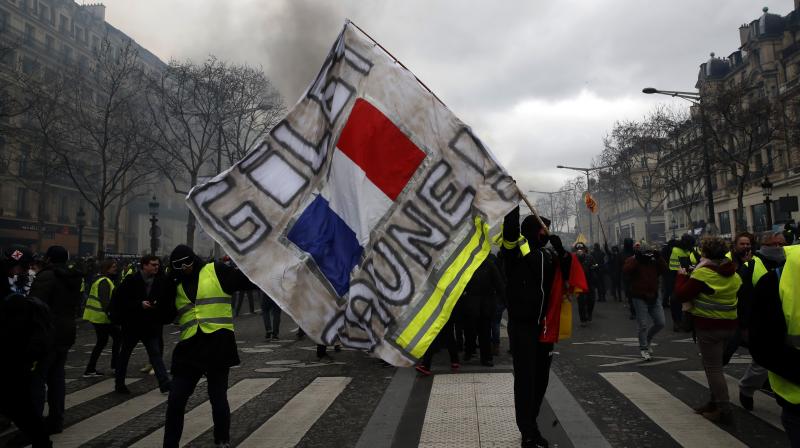 France's prime minister says the police chief of Paris had been sacked and the government would shut down yellow-vest protests if violent groups were identified among the ranks of protesters.

French President Emmanuel Macron cut short a skiing trip in the Pyrenees to return to Paris for a crisis meeting, vowing to take strong action.

Prime Minister Edouard Philippe acknowledged Sunday that there had been security "flaws" that needed to be addressed.

Images of the destruction - including from a bank fire that engulfed a residential building in Paris and threatened the lives of a mother and child - have shocked France and seem to be further eroding public support for the fizzling four-month-old movement.

"When a protest has been banned and its aim is to ransack and loot, all of those who take part it in and, in fact, protect looters, encourage them or glorify them online, are complicit and will have to face the consequences", he said.

France's government faced harsh criticism on Sunday, in the aftermath of an arson and looting rampage perpetrated by demonstrators during a "yellow vest" protest in Paris the day before.

Public support for the yellow vest movement that began on November 17 and sought economic justice is fading as its message is being lost amid internal divisions and extremist violence at protests.

The rioting comes at the end of a two-month national debate that President Macron organised to respond to protesters' concerns about sinking living standards, stagnant wages and high unemployment. At issue, lawmakers noted the resulting downgrade in France's trading situation and "economic attractiveness", that comes as a outcome to the disruptions on the street, the Senate said in a statement Sunday.

Others blamed the violence on the "thugs", a hardcore group of ultraviolent yellow vest demonstrators that Interior Minister Christophe Castaner said comprised a mere 1,500 individuals that came into Paris just to smash things up.

Cleaners swept up broken glass, while shop owners boarded up smashed windows on Sunday after the worst unrest in central Paris since violence peaked before Christmas in a weekly series of protests. Around the country, the ministry estimated that it was up from last week - at 32,300, compared with 28,600.

The latest demonstrations were characterized by a sharp uptick in violence after weeks of dwindling turnout. Some yellow vests threw smoke bombs and cobblestones at officers, who replied by deploying clouds of tear gas. The prestigious Champs-Elysees, known for its shops, cafes and luxury boutiques, has been the focal point for the demonstrations which have often turned violent, sparking running battles between police and protesters. Philippe criticized the Paris police for their handling of Saturday's protests, saying "the strategy for maintaining order was not correctly implemented".

Paris police told The Associated Press that 109 people were arrested in Paris on Saturday.