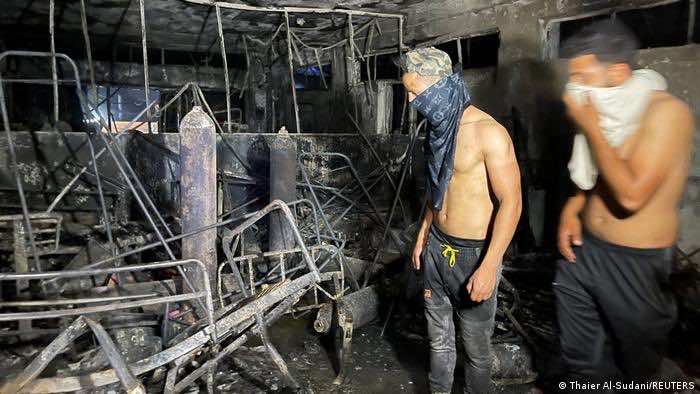 At least 28 patients who died were on ventilators in Covid-19 Intensive Care Unit wards, according to Ali al-Bayati, a spokesperson of Iraq's independent Human Rights Commission.

The fire was believed to have been caused when at least one oxygen cylinder exploded inside the hospital, according to local media.

The Special Representative of the United Nations Secretary-General for Iraq, Jeanine Hennis-Plasschaert, expresses shock and pain at the enormity of the tragic incident that befell COVID-19 patients at the Ibn Khatib hospital in Baghdad Saturday night.

People from all over Iraq are referred to the hospital in southeastern Baghdad, including many with Covid-19.

The fire at the Ibn Khatib hospital in the Diyala Bridge area of the Iraqi capital occurred after an accident caused an oxygen tank to explode, medical sources say.

. Iraqi authorities have not released to an official casualty count.

Firefighters rushed to battle the flames that raged across the second floor of the hospital.

Prime Minister Mustafa al-Kadhemi suspended Health Minister Hassan al-Tamimi - who is backed by the powerful Shiite leader Moqtada Sadr - amid angry calls on social media for him to be sacked, as part of a probe that would also include the governor of Baghdad.

Kadhemi responded by calling for "an investigation" - echoing President Barham Saleh and parliament speaker Mohammed al-Halbousi - and said he wanted results "within 24 hours". "I have directed an immediate investigation and questioning of the head of the hospital, the head of security and maintenance, and all those concerned", Al-Kadhimi said in a statement.

The Special Representative calls for stronger protection measures to ensure that such a disaster can not reoccur.

The health ministry has recorded more than 15,000 deaths since the pandemic broke out a year ago, and has carried out around 40,000 tests daily from a population of 40 million.

The injured and patients who weren't hurt have been taken by ambulance to other hospitals nearby.

Around 300,000 people had received at least one dose as of Wednesday, the ministry said.

Iraq rolled out its vaccination campaign last month and has received almost 650,000 doses of different vaccines - the majority by donation or through the Covax scheme for low and middle income nations. The government is urging the public to get vaccinated, but demand has been low due to widespread mistrust of the health care system and the vaccines in particular.

New Zealand pauses travel bubble after Australian Covid outbreak
Mr McGowan said test results are forthcoming after contact tracers uncovered 337 contacts linked to the initial local case. The Ministry of Health added information for anyone who is in New Zealand and has been in Perth or Peel since April 17.
Saturday, April 24, 2021

15-year-old girl fatally shot by police in Ohio
The Columbus Police Department could not say on Tuesday whether Bryant was the one to call for assistance before she was shot. Her family says she called the police around 4:30 p.m. with a report that someone was trying to stab her, 10TV reported .
Wednesday, April 21, 2021

Indonesian navy submarine reported missing with 53 people aboard
Some reports say contact was lost after the submarine had been given clearance to dive into deeper waters. It is one of five submarines owned by the Indonesian armed forces and was built in West Germany in 1978.
Wednesday, April 21, 2021